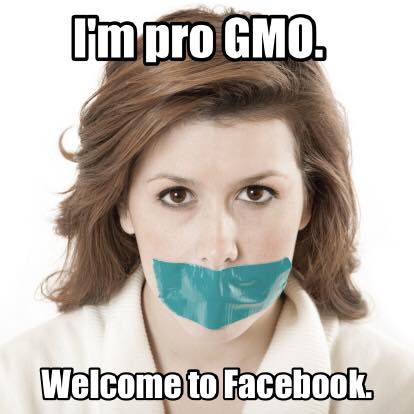 Steve Novella has written an article that grants us a really good insight into the recent GMO wars that have been taking place within social media. The quick summary is this …

Does this imply that FB are now Anti-GMO, Anti-Vax, and so have taken an anti-science stance?

Actually no, there is something else going on here. First, the actual takedown by FB is not a thoughtful response, but instead just reflects how Facebook has been setup. It is most probably either a totally automated process or is somebody offshore simply doing it manually is response to the number of complains that have been received.

That’s really not great because it enables any group to gag anything they don’t like if they can get organised enough to coordinate bulk complaining. Since FB is a private company then they can act in whatever manner that they feel best serves their financial interests, even it is involves empowering a social-media lynch mob.

Now moving on into the specifics, there is a rather important point being made by Steven Novella …(I’m cutting and pasting a few key snippets from his article) …

The deeper issue here revolves around tactics used by both sides to promote their point of view.

Both sides, of course, accuse the other side of using horrible tactics, painting themselves as victims, and professing their purity. I am not implying equivalency here, just pointing out that this is the story both sides are telling. You have to delve into the details to see what is really going on.

Now pay attention, this is the important bit …

The anti-vaccine and anti-GMO crowd cannot win in the arena of objective science. That is why they desperately try to make their activism about accusing people of being shills, conspiracy theories, and mean tweets. We need to keep it about the science. It’s fine to point out the horrible tactics used by the other side, but we should not “fight fire with fire.” If we do that, I think, then we are surrendering the high ground. We are abandoning a winning strategy in order to fight a fight we cannot win.

… and there rests a rather important point. If we are going to be activists, then we truly do need to think long and hard about what is an effective strategy.

One commenter on Steve’s posting (the first one) does grant us further insights (I’m not in a position to confirm this, so best to simply take it at face value, I suspect it might not be wholly factual, so please digest with a pinch of salt) …

I’d been following the drama with We Love GMOs and Vaccines for a few months now when it was temporarily banned and brought back then banned again. I was not comfortable with how Neidenbach handled the situation, but he obviously ran his page in a manner consistent with his personality for people who find that entertaining. I am apparently not part of that demographic and that’s ok. In person, with my friends, I’m snarky and sarcastic. My friends understand that I’m ribbing them, I can read when I should stop, and I expect the same from them. When someone is instigating others online that dialogue doesn’t exist, tempers seem to flare much easier and it is obviously easier to take things too far when there is a keyboard between you and others. Personally, I feel like he crossed the line several times.

However, Steven’s point regarding Facebook’s hand in the affair is well made. At the point that this came to a head, the WLG&V page was trolling* Erin at Health Nut News (Mercola’s girlfriend) and she used very underhanded tactics that were well documented to get the page taken down. She actually documented them herself and bragged to her followers. Initially she had her followers report the page any time they mentioned one of their names in a comment because that is apparently against Facebooks terms of service. Then WLG&V started using nicknames instead. I don’t recall what they were, but let’s just say one was “Erin the Nutter”. Erin admitted to opening new Facebook accounts using the nickname made up by WLG&V just so that she could report him.

In other words, while Mr Neidenbach is right because he does have scientific evidence to back up his position, his approach and tactics were perhaps flawed because he was never going to persuade by pissing people off.

Side Note: I simply can’t avoid wondering what would happen if a sufficiently large enough crowd complained about the official FB page on FB, and I’m not the first to go there (and no, I’m not seriously suggesting this as a strategy) …

It has been my experience that a yelling or mud slinging match does not change minds, nor does the deployment of the outright harassment that is openly practised by some of the anti-GMO and Anti-Vax crowd. That approach will not only piss people off, but also helps to foster a tribal mentality and leaves them even more entrenched.

I will however add that Stephen Neidenbach is one of the good guys, and even if he has adopted a style of engagement I would not personally recommend, I do still wholly support the evidence-based scientific conclusion that he promotes.

Some really do take the high road

Anti-GMO activists have slandered companies and individuals, harassed scientists, spread demonstrable misinformation, and vandalized scientific experiments. They have targeted Kevin Folta, who I know personally and is one of the nicest people I know, and a very dedicated and talented science communicator. They have harassed him with FOIA requests so they can go on a fishing expedition in his e-mails looking for anything to distort. They have broken into his office, apparently also looking for incriminating evidence.

The GMWatch article, however, paints Folta as a villain. It is truly bizarre. In response to harassment by the Food Babe, Kevin wrote to his readers:

“First, some rules. Please do not retaliate or harass her. Respect her privacy for one reason– I can tell you personally how horrible it is to have someone not respect mine. I do not want her to feel the way I do, because of her. There’s some Sunday irony. Thanks.”

He has deliberately taken the high road. For that he is portrayed as a villain and a shill coordinating an army of “followers” to attack anti-GMO activists. It’s simply not true.

Mr Folta is perhaps the example to emulate and sets a standard for integrity.

Stephen Neidenbach has been in contact and has some additional notes …

The comment from Novella’s blog though was not accurate. I think he is combining different events in his head. The technique of using nickname’s was discussed here, and was related to a different situation.
http://scienceblogs.com/insolence/2016/04/01/an-antivaccine-activists-explains-how-she-uses-facebook-reporting-algorithms-to-harass-and-silence-pro-science-bloggers/
We never called Erin a “nutter”. We attack ideas and actions, not character.