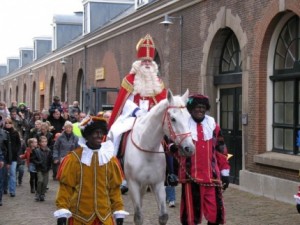 Jake Simons writes in today’s Telegraph about a truly obnoxious Dutch tradition – it surprised me, I’d not previously known about this. The current tradition is in fact not all that old and dates back to Jan Schenkman’s popular 1850 book “Saint Nicholas and His Servant“. So basically what happens is that on 5th December Sinterklaas turns up with presents (so far no problem), ah but wait, he comes with Zwarte Piet (Black Peter) who actually hides the presents.

That turns out to be Santa’s slave … yes really … and is usually an adolescent in blackface with black curly hair and is dressed like a renaissance minstrel (I think you can see where this is going now).  As described by Mr Simons in his article …

… in the mid-1800s, when the Dutch were major players in the global slave trade, this changed. To this day, Sinterklass turns up with Black Peter, or Zwarte Piet, a subservient, child-like, simpleton character in black face paint, red lipstick, and an afro wig. To get a feel for the degradation this involves – if you have a strong stomach – watch the video above. The unvarnished racism it portrays is nothing short of breathtaking. Not only is Black Peter forced to carry out demeaning domestic chores, he is led down the street on a lead and shown scrabbling for dog food on the floor. At one point, a Victorian illustration of slave masters beating black slaves is flashed onto the screen, to the sound of laughter from the audience. Cultural differences or no cultural differences, this is beyond the pale. It is astounding that in 2012, this is part of mainstream Dutch culture.

Now let’s think about this carefully …

Look, it’s just a bit of traditional fun, you are taking political correctness too far

Really? OK, try this then, would you be prepared to dress up as a Nazi and parade about outside the local synagogue once a year? It is a serious topic, a rather obnoxious bit of human history that involved millions of black people being killed or enslaved by white people over four centuries. Millions more still continue to suffer discrimination all over Europe and in the States, so this Zwarte Piet character is about as funny as wearing a swastika.

It has its origins back in 1850, a time when slavery was still considered to be a jolly good idea, well times have changed, it is now long past its sell-by date, now is the time for the Dutch to move on and discard this reminder of something that is quite frankly an abhorrent bit of human history.

Sinterklaas once started without Zwarte Piet, that got tacked on later, so it is indeed time for Sinterklaas to continue without him.