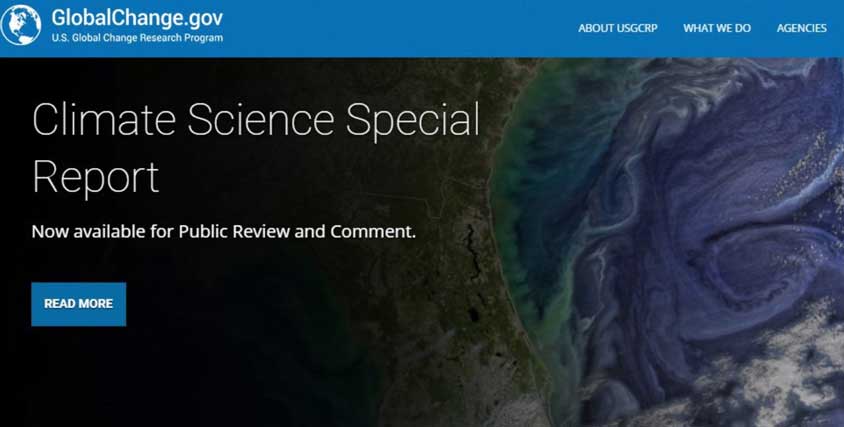 A legacy of the Obama administration was the production of the Climate Science Special Report. This is a report that is created every four years by the federally funded U.S. Global Change Research Program and is designed to list out exactly how Climate Change is impacting the US.

Shortly before the current band of anti-science fact-devoid lunatics formally became the new administration, the latest draft of this report was submitted to the National Academies of Sciences, Engineering and Medicine for a complete detailed review.

That formal and completely independent review has been completed.

The description for that rather large document reads …

The United States Global Change Research Program (USGCRP) is moving towards a sustained assessment process that allows for more fluid and consistent integration of scientific knowledge into the mandated quadrennial National Climate Assessment.

As part of this process, the USGCRP is developing the Climate Science Special Report (CSSR), a technical report that details the current state-of-science relating to climate change and its physical impacts. The CSSR is intended to focus on climate change in the United States and to inform future USGCRP products.

Review of the Draft Climate Science Special Report assesses whether the draft CSSR accurately presents the scientific literature in an understandable, transparent and traceable way; whether the CSSR authors handled the data, analyses, and statistical approaches in an appropriate manner; and the effectiveness of the report in conveying the information clearly for the intended audience. This report provides recommendations for how the draft CSSR could be strengthened.

It is a very positive endorsement …

The Committee commends the CSSR authors for producing an impressive, timely, and generally well- written draft report and was impressed with the breadth, accuracy, and rigor of the draft CSSR.

First, it focuses on changes in the climate system as they affect the United States. Previous reports on this topic, such as those produced by the Intergovernmental Panel on Climate Change (IPCC), have focused on global-scale changes, which may not always translate directly to climate changes occurring in the United States.

Second, the report provides a synthesis of recent manifestations of continued climate change observed since the publication of the last IPCC report in 2013, including: a new global temperature record set in 2014, which was broken in 2015 and again in 2016 thanks in part to a strong El Niño event; continued decline in Arctic sea ice; and record high globally averaged atmospheric carbon dioxide which has now passed 400 ppm.

Third, the draft CSSR includes several significant advancements that have been made in the science of climate change, including the rapid development of the field of extreme event attribution, and new evidence concerning the Antarctic ice sheet that raises and better quantifies the upper bounds of projected sea level rise. These recent observed changes in Earth’s climate system and substantial advancements in the science of climate change underscore the importance of up-to-date assessments like the draft CSSR. The draft CSSR, by building on previous solid work and incorporating recent advances, provides a valuable update.

“The National Academy of Science’s review of the U.S. Global Change Research Program’s Special Report not surprisingly reaffirms the basic science of climate change, Indeed every national academy in the world has concluded climate change is real and a serious threat to human well-being.” – Tom Lovejoy, an ecologist at George Mason University

In no uncertain terms, the draft report itself strongly underlines the reality of climate change …

Many lines of evidence demonstrate that human activities, especially emissions of greenhouse gases, are primarily responsible for the observed climate changes in the industrial era. There are no alternative explanations, and no natural cycles are found in the observational record that can explain the observed changes in climate. (Very high confidence)

…In the industrial era, human activities have been and remain the dominant cause of climate warming and have far exceeded the relatively small net increase due to natural factors, which include changes in energy from the sun and the cooling effect of volcanic eruptions.

Will anybody within the new administration pay attention or even bother reading it?

Probably not, we already know that facts and truth don’t matter to them.

What it does clearly highlight is that both the assertions now being promoted and also the actions being taken by the new administration are disastrously wrong, not just for the US, but for all of humanity.