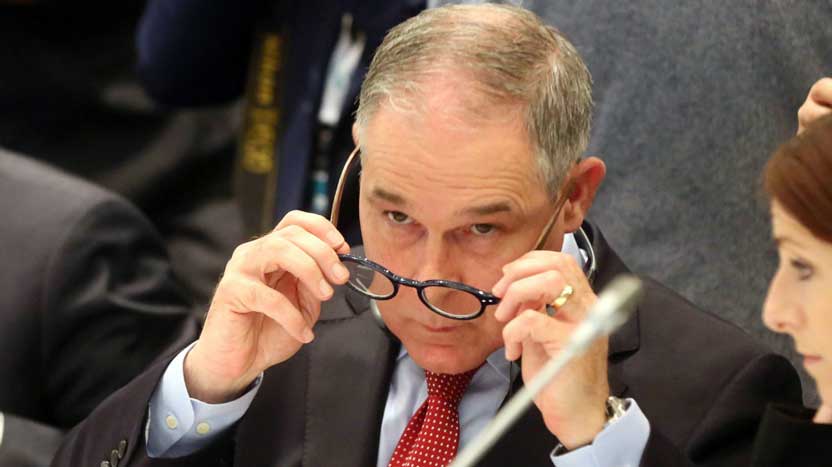 If you don’t know who Scott Pruitt is, then simply imagine Trump tracking down the most incompetent corrupt anti-environmental climate-change-denying candidate possible and appointing him to run the US Environmental Protection Agency.

You might perhaps consider that to be a politically-motivated exaggeration. Sadly it is not, it is a quite literal fact-based observation.

A coalition of 10 progressive and environmental groups are launching a campaign Wednesday saying President Donald Trump’s EPA Administrator Scott Pruitt needs to go. The campaign, which is spearheaded by the Sierra Club, the Natural Resources Defense Council, Green Latinos, Defend Our Future, Hip Hop Caucus, and others, includes many of the groups that have been out front protesting Pruitt and the Trump administration. Now they will collectively target Pruitt by launching ads, a petition, a website (BootPruitt.com), op-eds, and other actions, as part of the first coordinated effort to oust the administrator since he was confirmed by the Senate more than a year ago.

They have a strong case.

PRUITT’S DIRTY DEALINGS HAVE REAL AND DAMAGING CONSEQUENCES FOR CHILDREN, SENIORS AND FAMILIES.

PRUITT IS WORKING FOR INDUSTRY AT THE EXPENSE OF OUR HEALTH AND THE ENVIRONMENT.

Will he be removed?

Let’s be realistic, only Trump can actually remove him, and right now that is highly improbable.

The need for such a campaign is obvious …

“When you see people who are struggling with clean water, it’s really just hard to fathom we have somebody in charge of the EPA who pushes for the polluters at the expense of our community, at the expense of our environment, and our health,” – Rev. Lennox Yearwood, Jr., president of the Hip Hop Caucus, a progressive advocacy group involved in the effort.

… and so they are pledged to continue …

“This is a campaign that will continue until Administrator Pruitt decides to return to Oklahoma on his own or the White House asks him to,”

Trump f##ked Stormy once, but via the appointment of incompetent corrupt buffoons such as Pruitt and a refusal to remove him even when the evidence piles up, Trump is in effect f##king his supporters each and every single day, because none of what is happening is in their best interests.

The Hill – Greens launch campaign to get Pruitt fired

Washington Post – The Energy 202: EPA chief fires back on flight costs as #BootPruitt campaign revs up