When faced with the big C, either personally or perhaps somebody close, we would all be willing to try any and every option available. There is of course mainstream medicine and that would and should be utilised as best we can, that is beyond debate (I hope). However, where personal choice can play a role is with the decision to also leverage alternative treatments and try to enhance that.

Now here comes a rather interesting question, has anybody ever evaluated how effective such alternative treatments actually are for Cancer survival?

As an example, within the Journal of Clinical Oncology we have a Korean study …

Effect of complementary and alternative medicine on the survival and health-related quality of life among terminally ill cancer patients: A prospective cohort study.

What did they Study?

They specifically examined the effect of complementary and alternative medicine (CAM) use on both the survival and also the health-related quality of life (HRQOL) in cancer patients.

How did they do the study?

Between July 2005 and Oct 2006 the followed 481 terminally ill cancer patients, some of whom used CAM and some of whom did not.

What did the discover?

Then later when the followed up this is what they discovered …

CAM users did not have better survival than nonusers

On multivariate analyses, CAM users did not have better survival compared with nonusers 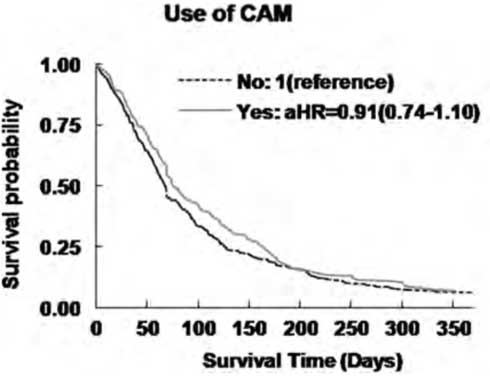 But … (if you are religious you better close your eyes now) …

However, what comes next is quite a surprise.

I do fully understand why some will try anything and everything, but if people are to face such choices then they should do so with the very best information we have available. In other words, the quacks and charlatans should not be permitted free reign to con people with false hope when individuals face such deeply emotional life-and-death decisions.

If a CAM treatment is to be offered, then it is of vital importance that people should understand that some of these treatments will impact their quality of life in a negative manner. To claim anything else in the face of such clear evidence would be grossly dishonest, and yet that is exactly what the CAM community does, but not because they deliberately deceive, but rather because they have an almost religious belief like emotional devotion to the treatment they have to offer.

Those that promote and offer CAM might be tempted to consider this to be a flawed study that is very much at odds with the evidence, but it is not. It simply confirms what other studies have already revealed. Over on his blog Professor Edzard Ernst documents the above study and others that also reveal a similar outcome.

He does also point out several possibilities here …

There are, of course, several possibilities, for example:

1) Some patients might use ineffective alternative therapies instead of effective cancer treatments thus shortening their life and reducing their quality of life.

2) Other patients might employ alternative treatments which cause direct harm; for this, there are numerous options; for instance, if they self-medicate St John’s Wort, they would decrease the effectiveness of many mainstream medications, including some cancer drugs.

The available data do not allow us to say which explanation applies. But things are rarely black or white, and I would not be surprised, if a complex combination of all three possibilities came closest to the truth.

What is clear is that CAM is not mainstream, and is very much a fringe alternative, not because of some big-pharma conspiracy, but rather because nobody has ever established that any of it is in any way effective at all. It would be truly exciting to actually discover something additional that really did make a positive contribution to either the survival rate or simply to the quality of life, and if there was indeed something then it would warrant proper scientific scrutiny so that it ceases to be an alternative and goes mainstream, but so far the evidence available shows that the CAM community has nothing except false hope that in reality yields a negative overall impact.

I welcome all comments. If you wish to claim that CAM is effective and truly does help, then please don’t just assert that. Instead cite a study from a credible peer-reviewed journal that confirms it. That then enables us to have a potentially meaningful dialogue.