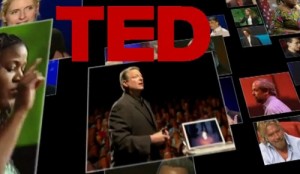 The TED brand, run by the folks who hold annual conferences to spread good ideas, have some truly inspiring clips (available for free). If you are not familiar with them, go check a few out, you will not be disappointed, and as a tip for finding the cream, I’d recommend that you crowd-source and pick the most popular. They are all quite digestible because each of the invited speakers get an 18 minute slot, so this forces them to not babble, but instead distil their thinking.

As an extension to TED, they have a franchise called TEDx where they grant licenses to third parties to organize independent TED-like events internationally. This has proven to be very popular because, as reported in June 2012, five TEDx events on average were being organized every day, in one of 133 countries. Rather sadly in some instances, these third parties have been damaging the TED brand by propagating speakers who promote complete bullshit.

In order to address this rising tide of concern that is being raised in public forums, the TEDx directors (Lara Stein, TEDx Director and Emily McManus, TED.com Editor) have written an open letter to TEDx organizers advising them on how to avoid promoting bad science. This letter is a really good and contains guidance that is of interest, not just to TEDx organizers, but to anybody interested in working out what is good and what is in fact complete bullshit – and that means you and me.

What is bad science / pseudoscience

here are some basic guidelines.

Because of the sad history of hoaxes with deadly consequences in the field of autism research, really look into the background of any autism-related talk. If you hear anything that sounds remotely like, “Vaccines are related to autism,” — RUN AWAY. Another non-legitimate argument: “We don’t know what works, so we have to try everything.” Pretty much all the time, this argument is designed to cause guilt in suffering parents so they’ll spend money on unproven treatments.

Topics to watch out for

Be alert if a potential speaker (or the speaker’s advocate on your planning team) does any of the following things: