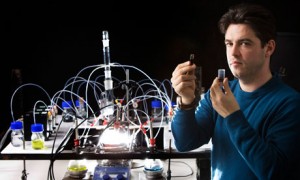 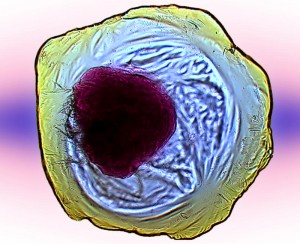 The idea is that these Inorganic chemical cells (iCHELLs) can be compartmentalized by creating internal membranes that control the passage of materials and energy through them, meaning several chemical processes can be isolated within the same cell — just like biological cells.

It is really fascinating stuff because iCHELLs, which can also store electricity, could potentially be used in all sorts of applications in medicine, as sensors or to confine chemical reactions.

Here is a TED talk from July 2011 by Professor Lee Cronin, the chap driving all this:

The Guardian have also written an article on all this entitled “Aliens could be made from iron“. This takes the form of a Q&A interview. Here is some of that dialog …

What is inorganic biology?

Inorganic biology is my attempt to try to ask a very basic question about the nature of matter in the universe: can we do biology outside of organic chemistry?

You think biology is defined by evolution?

Yes, evolution occurs in biology but it doesn’t occur anywhere else in the natural world. What I mean by evolution is this idea of survival of the fittest and adaptation by replication or birth of offspring. Evolution is a very good way to make complex systems that are robust and function in an environment. Darwin’s theory of evolution is in fact a special theory of evolution because it only applies to biology, it only applies to carbon-based life. But four-and-a-half billion years ago there was no life. So I wanted to ask the question: what is the most basic unit of stuff that can independently undergo evolution? You could probably tell me the answer…

Exactly, a biologist might say bacteria are too complex but basically they are single-cell creatures of some description. And so when you set up that you come up with three questions, which are: what is life?; is biology special?; is matter evolvable? If we answer them in reverse order: we know matter is evolvable because biology is made of matter and it needs chemistry material to do its stuff. And if we could make general stuff outside of biology evolve, then we would know how special it is. And then that would lead us to question what is life.

To finish, here is a quote from Prof Lee Cronin that (for me) sums all this up …

“If successful this would give us some incredible insights into evolution and show that it’s not just a biological process. It would also mean that we would have proven that non carbon-based life could exist and totally redefine our ideas of design.”