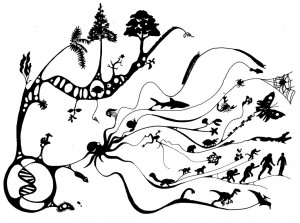 This is quite funny, well-known young earth creationist, Paul Nelson gets completely pwned.

Dr Jerry Coyne is a professor of biology who is well-known in some circles for going head-to-head with the intelligent design community. Least you wonder who they are, those are the “God did it” brigade who attempt to make it all more palatable by stripping away all the religious bits and dress it all up as “scientific”, although I do really struggle to even begin to comprehend how you make “it was magic” a scientific claim because that is what the claim really is touting if you eliminate the religious-speak. Anyway, Jerry has not only published, “Why Evolution is True”, a book that takes you through it all, but also has a blog called … can you guess … “why Evolution is True“.

Meanwhile over in the Intelligent Design camp … (quick pause), as an aside the term Intelligent Design is often abbreviated to ID, and since we have a collection of them, then we can refer to them as IDiots … anyway, over in the IDiot camp there is a young earth Creationist called Paul Nelson. Now, because he is a philosopher of science he feels that he is sufficiently scientifically literate to go head-to-head on these topics, so he wrote a letter to Dr Coyne in which he made assertions such as the following  …

… Skepticism about the efficacy of natural selection is widespread within evolutionary biology … Eric Davidson, Michael Lynch, Andreas Wagner, John Gerhart & Marc Kirschner, or Scott Gilbert (all of whom, among many others, have recently expressed frank doubts about selection) must discount what you say about the centrality of natural selection to evolutionary theory — because they know that just isn’t so …

He then rambles on about how he gave a talk about all this at some church and is asking Dr Coyne for his thoughts on all this and links to a Video of it.

Now least you wonder who those names he is quoting were, they are …

… so indeed yes, they are all folks in the community who are familiar with the topic. Now as a quick aside, the huge flaw here is that something is true because there is evidence to actually verify it, and not because some well-respected person claims it to be true, no evidence means “claim dismissed”.

So how did Dr Coyne respond, did he simply present his thoughts on all this?

Nope, knowing what their views really were, he wrote to all the named individuals and asked them …

I’m writing just to let you know that you were mentioned in an email sent to me by Paul Nelson, a Discovery Institute Fellow and young-earth creationist. His email was written in response to a post on my website criticizing Jim Shapiro’s contention that natural selection is relatively unimportant not just in evolution, but in accounting for adaptations.

He then goes on to explain that however they reply, he will publish it if they give permission to do so, and of course all these evolutionary biologists wrote back explaining that this sciency stuff is nonsense and Paul was quite correct … er no. The replies were exactly what you might expect. Here, for example is what Eric Davidson wrote back …

Of course I would not disagree for one second about the importance of adaptive selection for species specific characters of all kinds, whether on protein or regulatory sequences.

I admire your willingness to take on creationists in public; I find their views so antediluvian that I can only ignore them.

Dr Coyne has published all the details and all the replies on his blog – so you can read it all here.

That was not quite the end of this saga, if you skip down the comments in Dr Coyne’s posting to number 17, there somebody points out that Larry Moran, a professor of Molecular Evolution, has been highly critical of Mr Nelson’s lunacy and includes links. Then in the very next comment, 18, Paul Nelson himself steps in and claims that the letters they wrote are wrong and that they really do doubt natural selection. To verify that, he then proceeds to quote mine some of their published articles, and frantically flails about as he tries and fails to defend his daft claim in the dialogue that then takes place between himself and various commenters.

You really just have to love it ….

Mr Nelson does try, but there really is no way to defend your claim after that.