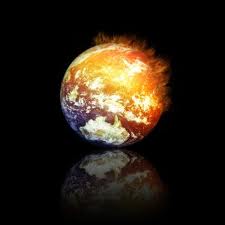 As no doubt you are aware, there have been various predictions regarding climate change. What is now being observed is that those predictions are wrong … because what we are actually seeing is a far faster rate of change. David Biello wrote about this in Scientific American yesterday …

Climate change is happening faster than scientists’ predicted. Meltdowns in Greenland and Antarctica are well ahead of climate science projections and overall warming continues to accelerate—we have just endured the hottest year and hottest decade on record. About the only thing that isn’t happening faster than expected is increasing concentrations of CO2 and other greenhouse gases in the atmosphere, still steadily ticking upwards by roughly 2 parts-per-million (ppm) per year.

So is this just a rehash of data that has been floating about? Nope, he has some new information for us …

Now, a new study from the Argentina-based Fundacion Ecologica Universal suggests that if the world continues to burn fossil fuels and emit CO2 at its present pace, atmospheric concentrations will reach 490 ppm by 2020—up from roughly 390 ppm today. Extrapolating that directly into heat, the study suggests global average temperatures would rise by 1.4 degrees Celsius in the next nine years alone—more than six times faster than present warming. The researchers move on then to their real concern: the impact of all the heat on food crops (not good), hence the study’s title: “The Food Gap.” (pdf)

OK, thats the scary part out on the table, so lets move on to the reality check.

Yes, we should indeed be concerned, but the claim being made about the CO2 emissions translating into a 1.4 C increase is simply not credible. As David rightly points out in his article …

The only problem is that increasing concentrations of CO2 don’t translate instantaneously into warming. In fact, greenhouse gases take time to trap the sun’s heat and warm the globe—the main reason we have built up a store of trouble for the future with more than a century of greenhouse gas emissions. In fact, the average temperature of the planet for the next several millennia will likely be determined this century by those of us living today and how much fossil fuel burning and deforestation, among other things, we choose to engage in.

Our content partner Climatewire reported on this study, including caveats from climate scientists not associated with it questioning its assumptions and noting the timing problem. We posted the Climatewire story on Wednesday morning, then took it offline Wednesday evening after we learned about the study’s significant criticism and republished it Thursday with an explanatory editor’s note. Climate scientists and climate contrarians alike are denouncing the study for its aggressive assumptions about the potential pace of climate change as well as its impacts on agriculture and hunger.

Knowing that Climate Change is real and that its happening  does not mean you should embrace everything that comes along that apparently supports it, but when examined, does not. Its always important to …. be skeptical …. of all claims. While the data might be right, you always need to ask yourself if it supports the suggested conclusions.

I must confess, it is rather bizarre to see the Climate scientists and Climate contrarians agreeing for a change, usually the only thing they ever agree on is that they disagree.

You can read the original Scientific American article here.

1 thought on “Climate change is happening faster than scientists’ predicted.”