400 ppm is an artificial milestone of course, and yet perhaps also a significant one. We are apparently travelled back in time to the Pliocene, a time roughly 3 million years ago when the earth was a lot warmer and sea level was a lot higher. The global average temperature in the mid-Pliocene was 2-3°C higher than today, and global sea level was a lot higher. What we also know about that time is that the amount of carbon dioxide in the atmosphere exceeded 400 parts per million (ppm). The news is that we just breached the 400 ppm mark, a level that far exceeds the 280 ppm concentration present in pre-industrial times.

The folks over at national Geographic put it quite well …

The last time the concentration of Earth’s main greenhouse gas reached this mark, horses and camels lived in the high Arctic. Seas were at least 30 feet higher—at a level that today would inundate major cities around the world.

The planet was about 2 to 3 degrees Celsius (3.6 to 5.4 degrees Fahrenheit) warmer. But the Earth then was in the final stage of a prolonged greenhouse epoch, and CO2 concentrations were on their way down. This time, 400 ppm is a milepost on a far more rapid uphill climb toward an uncertain climate future.

Two independent teams of scientists measure CO2 on Mauna Loa: one from theU.S. National Oceanic and Atmospheric Administration (NOAA), the other from the Scripps Institution of Oceanography. The NOAA team posted word on its web site this morning before dawn Hawaii time: The daily average for May 9 was 400.03 ppm. The Scripps team later confirmed the milestone had been crossed. 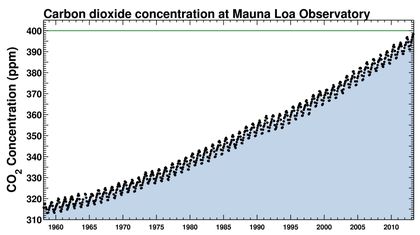 Having now hit a new high, it will drop and not hit 400 ppm in 2013 again. There is a seasonal variation, as spring kicks into high gear in the Northern Hemisphere, where most of the planet’s land is concentrated, the plants draw CO2 out of the atmosphere to fuel their new growth, but then up it will go again next year to even higher levels. If you look carefully at the chart above you can see this variation. By about 2015 or 2016, the whole atmosphere will be averaging 400 ppm for the whole year.

There is of course still denial, some attempt to claim that the world has not been getting warmer at all, and that for the past 16 years there has been no temperature increase …. wrong, it has warmed a lot, and yet such denial is having an impact …

Policymakers worldwide have been stymied in their effort to reach a global agreement on reducing fossil fuel emissions. Many scientists argue that the CO2 concentration must be stabilized at 450 ppm to avoid the worst impacts of climate change. Some activists argue for a more ambitious goal of 350 ppm. NOAA has not recorded an average monthly CO2 reading below 350 ppm at Mauna Loa since October 1988.

So what does all this mean, where are we heading? The planet was once very different, the temperature gradient between the tropics and the poles—which drives the jet streams in the mid-latitudes—was much smaller, and the east-west gradient across the Pacific Ocean—which drives the El Niño-La Niña oscillation—was almost nonexistent in the Pliocene. In effect, the ocean was locked in a permanent El Niño. Global weather patterns would have been completely different. Oh, that sounds nice, it was warm enough for  beavers and larch trees and horses and giant camels to live on Ellesmere island, where today we have nothing but a barren northern Arctic wasteland.

Er, no you don’t want to go there, you really don’t. That was also a time when sea level was a lot higher …

“The estimates have been all over the map,” Raymo says. They’ve ranged from 10 meters (33 feet) to 40 meters (131 feet) higher than today. But even the conservative estimate, were it to recur today, would mean flooding land inhabited by a quarter of the U.S. population.

Raised Pliocene shorelines have been identified all over the world. One is the Orangeburg Scarp, a wave-cut terrace that parallels the Atlantic coast of the U.S. from Florida to Virginia. Typically it lies more than a hundred miles inland.

We will not wake up to all this tomorrow, but this is where we are going, and while it may indeed take about a thousand years to melt all the Greenland and West Antarctic ice sheets, once you start down that road, it is darn difficult to stop it. Even if we dramatically reduced the carbon dioxide levels right now, the rise in tempature will still continue for centuries.

“For me personally that’s the scary thing, we really don’t know what we’ve already committed ourselves to.” – geologist Maureen Raymo of Columbia University’s Lamont-Doherty Earth Observatory