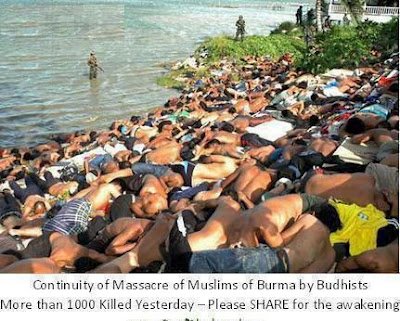 There are a lot of reports circulating in Facebook groups and also many Islamic blogs regarding a claim that thousands of Muslims have been slaughtered in Burma and that the world remains silent about it all. Pictures such as that shown here are common.

This comes with some text that usually reads … “50 thousand Muslims killed in Burma (Mayanmar) by Buddhist terrorists, the world is quiet, Muslims are killled by Others and they also blamed to terrorist, where is humanity ?”. An example of one of the many postings is here.

Is this really true? No, it is complete fiction. The original of the above photo can be found here. There we discover that it is actually an image of protesters being arrested and detained in Thailand in 2004. 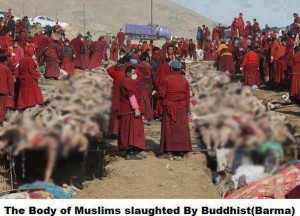 Many other similar examples of fake pictures abound. For example we have the following image as shown on the right here…also circulating

Is this really an image of a slaughter of Muslims by Buddhist monks? No, not at all, the original is in fact showing you Tibetan monks assisting earthquake victims and comes from here.

Do not be fooled by these blatant attempts to stir up hatred, the claimed slaughter of thousands of Muslims in Burma is a complete fiction. There is some evidence of unrest and I did find evidence that 10 Muslims died during some civil unrest, but not thousands or tens of thousands.

The death of just one individual, with or without belief is a tragedy, especially when it is belief driven murder. It happens, it really does, Muslims kill non Muslims, non-Muslims kill Muslims, Muslims kill other Muslims simply because of different beliefs, but in this specific instance the now widely circulating claim is complete fiction. The world remains silent, not because they don’t care a damn, but rather because it never happened. There are real instances of genocide, for example in the former Yugoslavia, where NATO stepped in to save the Muslim population, and many European nations then following up with a lot of humanitarian aid. They did this because they cared and because they were humans in distress, nobody had an interest in what their beliefs were, they just helped.

These pictures are clearly designed to ignite rage and motivate young passionate and impressionable youths to engage in a violent response in the name of Islam. The claim has no merit and is complete fiction.

Do not let yourself be fooled or conned by any of this.

26 thoughts on ““Massacre of Muslims in Burma” – Debunked”