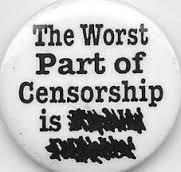 Not too long ago Maryam Namazie, an Iranian-born secularist and human rights activist, was invited to give a talk to the Atheists, Secularists and Humanists Society at Warwick university. That however was then cancelled by the students union because they feared she might “incite hatred” because as an ex-Muslim she would simply dare to criticise Islam. After a huge uproar (it made the national media) the ban was then quickly reversed, so the talk went ahead.

Are you curious to know what words she had that caused so much fear?

I’d loved to have been there, but alas, too far … ah but … we can all now get to watch, because her talk is now up on YouTube …

It’s a really great talk and to tempt you, here are a few rather important sound bytes that I’ve plucked out …

… and a great example of exactly that, was the daft attempt by the Warwick students union to ban her saying this.

But perhaps the real reason such censorship exists is this …

In my opinion, criticism of Islam is deemed dangerous not because of some patronising “concern for minorities” but because in the age of ISIS, it subverts and challenges the sacred which has always been a tool for the control of society in the interests of the dominant class under the guise of defending “public sensibilities” and “morality.”

Criticism of Islam challenges religion in political power and opens the space for dissent where none is permissible or acceptable.

Key Point: There is no abstract ideal at play here, this all truly matters Bcause lives are being impacted silence is not an option …

The Islamic regime in Iran, for example, sentences artist Atena Faraghdani to over 12 years in prison for a cartoon and “illegitimate sexual relations short of adultery” for shaking hands with her lawyer and violating gender segregation rules whilst here in Britain, Universities UK endorses gender segregation (now withdrawn due to our protests) and a student organiser advises me not to shake hands prior to a debate on Sharia law out of “respect” for some Islamist (of course I made a point to shake hands as I have no respect for an idea that sees me as so haram that a man cannot shake my hands – call me what you will).

Key Point: This is not xenophobia

What those conflating Islam, Islamism and Muslims miss – both on the “Left” as well as the far-Right – is that many Muslims are also critics of Islamism and even Islam. In fact, Muslims or those presumed or labelled such – like myself – are often the first victims of Islamism and at the forefront of resistance. After all, not everyone in the “Islamic world” or “Muslim community” or those labelled “Muslim students on campus” are Muslims and even if they are, religion is not the only characteristic that defines them.

Maryam raises some incredibly important points and is a voice that needs to be listened to, so I do encourage you (time permitting) to listen to her talk, or perhaps if you prefer to simply read the text.

“Blasphemy and apostasy are not a denial of religious freedom – there is no freedom of religion without freedom from religion. Criticism of religion is an essential aspect of being fully human in the age of ISIS.” – Maryam Namazie

Are you a Muslim who no longer believes, do you need help from ex-Muslims who have had the same experience …

The Council Of Ex Muslims can help.

You really are not alone, there are many out there with similar stories.