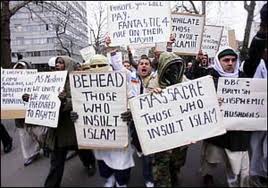 For those of you that have been on MARS, let me explain the background (oh and also welcome back to planet Earth). As reported within the Islamic world …

‘Islam is a cancer’, says United States (US) filmmaker Sam Bacile, the man responsible for sparking outrage amongst the Muslims of the Middle East. The 13 minute trailer of his movie ‘The Innocence of Muslims’ was recently released to the social networking website YouTube. The movie is said to be strongly anti-Islamic, and in his own words, Bacile said he intended his film to be a provocative political statement condemning the religion.

In response such reports and this trailer in which Muhammad is depicted as a “fool, a philanderer and a religious fake,” and “as a womanizer, a homosexual and a child abuser.”, there have been many days of riots and also some deaths at the hands of some Muslims who were outraged by it all. Alas, it would indeed now appear that somebody set all this up to troll the Islamic world.

So what exactly is wrong here?

Point 1 – It is a rather daft trailer consisting of bad actors wearing Monty-python beards, oh and let us not forget that the PR man appears to be Terry Jones, a rather extreme religious nutter. The claim that this is a trailer for a $5 million movie is simply not credible, many now suspect the end-game was the trailer itself, and that it was simply designed to provoke.

Point 2 – Sam Bacile does not actually exist, there is no such US Film maker. It is beginning to look like Nakoula Basseley Nakoula, a disgruntled Coptic Christian living in California who has been convicted of bank fraud and who admits involvement in the film, is the real puppet master here, but even that is not confirmed.

People have died – Should we ban this YouTube Clip?

Putting aside the identification of the real perpetrators and their motives, should this obnoxious clip that is masquerading as a movie trailer be banned because it offends religious people? Well, that indeed is a point to ponder over, because within it we find an obnoxious view that very few agree with being openly expressed.  I personally am not a Muslim and find Islamic religious claims to not be credible, but I’m quite happy for people to believe whatever they wish, that is a basic human right. However, this specific trailer goes way beyond normal debate and is pissing on entire cultures. The motivation behind it feels religious, Christian Religious specifically, because much of the content appears to reflect the beliefs in common circulation within such communities regarding Mohammed. The historical reality, as has been well illustrated by Oxford historian Tom Holland’s Channel 4 documentary ‘Islam: The Untold Story’, is that there is next to no evidence at all for the traditional view of him. (I blogged about that documentary here when it was first broadcast).  The very natural and obvious extension of that is the observation that any and all alternative claims regarding Mohammed are in exactly the same boat, they are simply claims that have next to no evidence and also lack historical credibility as well.

OK, back to the initial question, should such expressions of anti-religious PR be permitted?

From the viewpoint of Islam, Christianity is a false belief and Jesus is not God, but from the viewpoint of Christianity, Jesus is God and Mohammed is a false prophet. The reality of course is that it is not that simplistic (it never is), there are many shades of belief, an entire spectrum that runs from those that are simply part of the culture and are not actually religious, but just enjoy the traditions and holidays, all the way through the various degrees of belief to those who truly embrace all the claims as the literal and only truth, and are willing to die for it.

So my current conclusion is this, the way forward is to not yield to one specific strand of belief and pander to it because it is currently the most violent. That is not exercising tolerance, but is instead caving in to a form of blackmail. Essentially: “Suppress the views we don’t like, or we will riot and kill people because other views offend us.”.

The problem here is that you have no real means to work out a universal standard for what is and is not offensive, and using those who respond violently will only led to a sense of entitlement for the most prickly of the religious lunatics.

So what should happen?

We need a greater global sensitivity to the right of free speech, and a recognition that we live in a world populated with very diverse views. The Islamic world needs to recognise that their specific beliefs cannot be allowed to put limits on the speech of others however deliberately offensive it may seem to them, and to also recognise that this is to their advantage because their views are just as offensive to others. By preserving the rights of others to free speech, they also retain a similar right. If you are a Muslim reading this, then consider the picture above. It illustrates that it is quite possible to be a Muslim and to also be highly offensive, so should we also gag them?

Those that do go out of their way to deliberately offend should be faced with a deterrence that involves the public spotlight of harsh criticism being shone upon them, and identified as obnoxious anti-social cretinous lunatics. They should not however be gagged or face violent injury or death. Being offended gives nobody the right to a violent response or to riot, but a peaceful non-violent protest is indeed very appropriate.