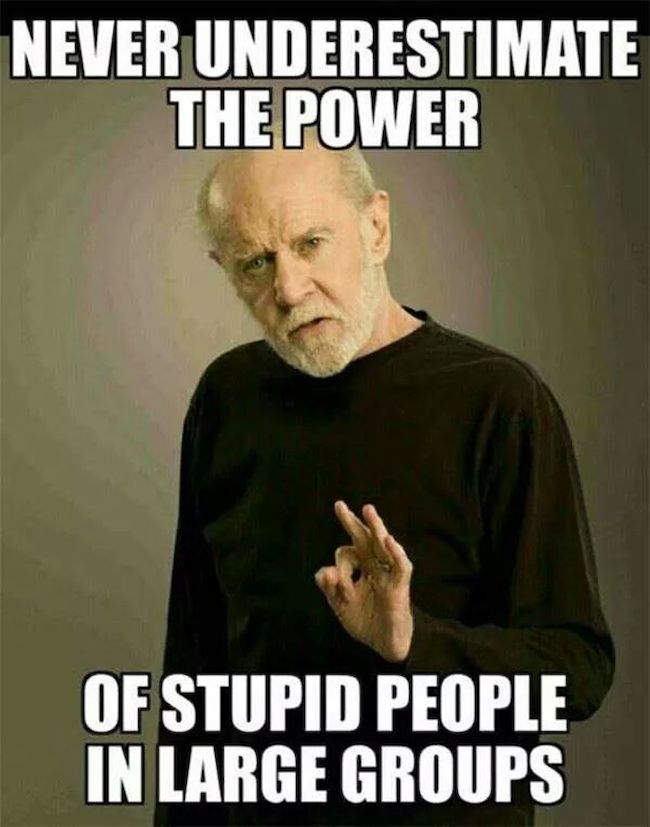 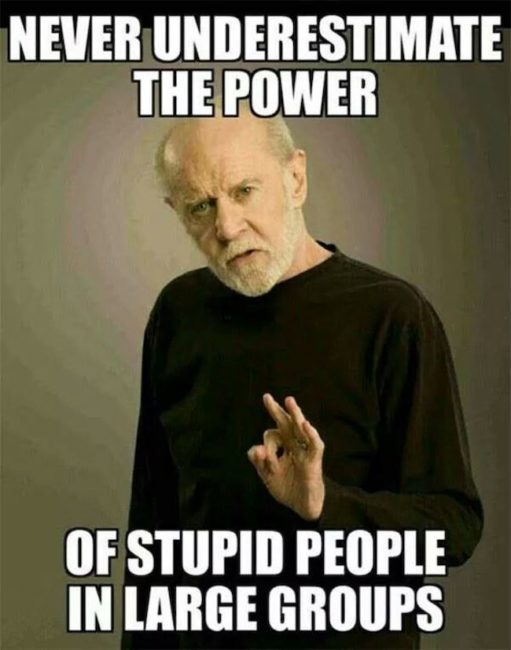 What can you do when faced with somebody who is determined to take a stance that is quite frankly absurdly stupid?

I have a personal example.

While checking into a motel last week in rural Oregon after a long drive, I encountered an elderly chap behind the desk who was quite determined to display an exceptional degree of utter stupidity.

Despite having all my details on file because it was a booking made online, he starts out by insisting that I fill in one of those little cards. OK, so far not all that uncommon. I left one column blank, the place where you enter a drivers license number. When he objected and insisted this had to be completed, I showed him my UK driving license. To my complete astonishment he then declares that this is not valid for the US, and that somebody in the car must have a US license and so he needed that. I carefully explained that using a UK license in the US for driving a rental is wholly valid, he was having none of it and insisted that he needed a US license number. Realising I was dealing with a special kind of stupid, I dutifully filled in a selection of random digits and upon seeing this he was then happy and proceeded to the next step; the financial transaction.

Another “special” moment arrived, my credit card is chip and pin, and so after entering my pin, he then asked me to sign. I pointed out that it was a chip and pin card and that no signature was needed. He was not having it, it must be signed he insisted. I carefully pointed out that the bit of paper he wanted me to sign specifically stated that no signature was needed. Despite this clear statement on the paper that he had just printed off, he stood his ground. It needed to be signed because everybody signs, that’s how it is done. This was clearly not an argument I was going to win, and so I simply gave him want he wanted and signed.

The above was just a flavour, because he continued in this manner to such an extent that I seriously wondered how he was able to survive as a motel clerk without greatly upsetting his guests . I’m guessing that most people simply flowed with the tide and did not try to fight it. You are at the end of a long drive and so the energy required to argue is simply not worth the hassle. For the record, it was unique. Most of the places we stayed in Oregon were fantastic and the various people we interacted with were both enthusiastic and highly sensible – we remember this guy as a contrast to it all.

You will of course have realised that this is not a rant about about one lone model clerk, but rather is more about the manner in which humans can and do adopt a position and then stick with it despite the evidence screaming out to them that it is utterly absurd.

We might indeed seek and relish the idea of an impeachment, but be aware that this will not in any way address the issue we now face. The core problem is not Trump, it never has been just him. Instead, the real concern is the literally millions who voted for him, and still do very much support him despite everything. The constant flow of daily lies, the appointment of utterly incompetent anti-science buffoons to key positions, and a stream of decisions that do not serve the best interests of the people, have become the norm. The observation that so many find all this to be acceptable and just fine leads to the conclusion that there are literally millions of very stupid gullible people who will happily vote in a manner that is not in their own personal best interest.

Tribalism is very much in play. Humans generally tend not to think too hard about many things and instead simply adopt tribal positions. Once invested emotionally, humans then tend to stick to a specific stance no matter how absurd, and will instead rationalise things in a manner that enables them to preserve that investment.

How you should not handle this?

Do not do this, no really don’t, because nothing will change.

The truth of the matter is that you really can’t tell anybody anything, they need to work it out for themselves.

Humans tend to function both heuristically and also analytically, but often one of those specific modes dominates. When it is the heuristic mode, we generally tend to adopt by sourcing our behaviour, beliefs, and also our views from those around us and from the information sources we are exposed to. If however we lean more towards analytical thinking, then often we will not be happy to passively accept but will instead question and challenge things and often lean towards what the available evidence tells us.

A highly effective strategy is to nudge the analytical mode into life by asking questions that awaken it. Perhaps even by playing dumb and getting them to explain something to you. Gosh this card of mine appears to be a chip and pin card, what is that all about, how does that work?

What about ourselves, are we as individuals so utterly stupid and yet basking in so much unearned confidence that we remain oblivious to our true state? We call that the dunning-kruger effect. If however you retain doubt about many things and only hold specific views with an appropriate degree of confidence that is justified by the available evidence, then you are most probably doing just fine.

Utilize compassion and empathy – a good relationship leads to a productive dialog, being a dick will not.

Ask questions that have the potential to trigger analytical thinking.

“The best lack all conviction, while the worst
Are full of passionate intensity.”