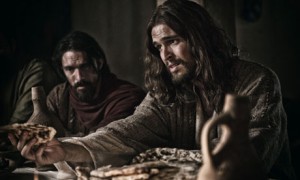 Alan Yuhas has a simply hilarious take on the latest attempt to bring the Bible to TV (gosh, the Bible on TV, that has never been done before). There have been various other “observations” made about it all such as the portrayal of Satan by a chap who looks just like Obama, or the list of bat-shit crazy miracle claims (there was a bit of wind at one point: wow that never happens; the guy hired to clear the outside set of snakes found 48; they lost something and somebody returned it a few days later), yep, all distinctly clear proof of gullibility.

Anyway, aside from all that Mr Yuhas nails it for what it really is … a badly acted presentation of the sugar coated nice bits …ah but he puts it far better than I do, oh and you need to remember this series comes from the “History” channel, the folks who abandoned doing any history a very long time ago but retained the name for the irony …

The Bible as a mini-series seemed like an obvious disaster. It is, too, in all ways except one: ratings. The scriptures according to basic cable don’t purport to be historical, but they’re about as bad and cynical as TV can be.

I don’t necessarily question the sincerity of the head producers, Mark Burnett, the creator of the reality show Survivor, and his wife, Roma Downey; they’ve said this is their “calling” and want to alleviate “Bible illiteracy”. I do question their methods, however, not to mention the results.

Why are so many people watching? Narrative? The producers don’t seem very concerned with narrative. The book has more rich stories and characters than could ever fit into a mini-series, a fact the producers acknowledge by leaving most of it out. They jump from one famous story to another; Eden, Noah, and Moses get crammed into one episode, for example. The Ten Commandments only get a brief mention by the narrator. Characters are one-dimensionally good or evil, and the dialogue is so wooden Jesus could’ve carved a table out of it. The sum is bland, erratic, and would be incoherent if it weren’t somewhat familiar material. The Wire this is not.

Nor is it Mad Men: people sure aren’t watching for the production values. The actors deliver lines with the bombast of a comic book or the whispery solemnity of a high school staging Hamlet. The CGI and slow-mo action sequences, which are legion, evoke nostalgia for Cecil B DeMille’s Red Sea. Downey has bragged about the show’s low budget, but the result is so cringe-inducing that one wishes History had tossed them a few more shekels.

Bible scholars have made deeper criticisms, including the “whitewashed” cast, the marginalized role of women, and an aversion to unpleasant details so strong that the show ultimately misrepresents the Bible.

The cast, touted as “international”, consists of mostly white Europeans and Americans; so far, only Samson and Satan have been major characters played by minorities, sparking anger and amusement, for the respective castings.

Patriarchy of the text aside, the Bible doesn’t work without its many strong women, but the series keeps them on the margins, even when Downey herself dons Mary’s veil several hours in. These decisions are aimed at making the show more immediately familiar to the conservative, American Christians, who apparently can’t handle actors who don’t look like them. Glenn Beck, for instance – a man who might be called resistant to change – has praised it as “a vision, a gift that I haven’t seen ever before on television”.

Moreover, the show airbrushes or omits anything even remotely uncomfortable: slaves are referred to as “servants”, all marriages are made to look monogamous, and violence is mostly portrayed as either God’s will or the actions of villains. Per the scholar Wil Gafney:

“The Bible is a wonderfully rich, complicated, challenging, illuminating, revelatory text. It is also horrifically violent and does not say what we want the way we want it to.”

Great but ambiguous stories – the one where God and the devil ruin a man’s life on a bet, for instance – have no place in this series. One suspects they skip the Ten Commandments because of that bit when Moses crashes the party round a golden calf. Don’t expect to see any of the really dark or strange stuff, either, like what happens to Lot after his wife turns to salt.

So there you go then, the ultimate damming criticism, Walmart and Glenn Beck like it, yet people are flocking to this and slagging off Game of Thrones, what is wrong with these people? I suspect we will never get to see it in the UK, which is perhaps a tad sad, because this is so bad it might just be watchable, in a manner that is akin to SiFi fans tuning in to watch Ed Wood’s “Plan Nine from Outer Space” because it is the worst movie ever made by the worst director ever.

For those that can’t view the video, here is the script …

Pope: (John Cleese) Good evening, Michelangelo. I want to have a word with you about this Last Supper of yours.

Pope: I’m not happy with it.

Pope: No, not happy at all.

Michaelangelo: Do the jellies worry you?

Michaelangelo: No, they add a bit of color, don’t they? Oh I know, you don’t like the kangaroo.

Michaelangelo: I’ll alter it, no sweat.

Pope: I never saw any kangaroo.

Michaelangelo: Well it’s right near the back. But, I’ll, I’ll paint it out, no problem. I’ll make him into a disciple.

Michaelangelo: Are they too Jewish? I made Judas the most Jewish.

Pope: No, no, it’s just that there are twenty-eight of them.

Michaelangelo: Well, another one would hardly be noticed then. So I’ll make the kangaroo into a disciple…

Michaelangelo: Well, all right, all right, we’ll lose the kangaroo altogether then. I don’t mind. I was never completely happy with it.

Pope: That’s not the point. There are twenty-eight disciples.

Pope: Well of course it’s too many!

Michaelangelo: Well in a way, but I wanted to give the impression of a huge get-together, you know. A real Last Supper, not just any old supper, but a proper final treat, a real mother of a blow-out.

Pope: There were only twelve disciples at the Last Supper.

Michaelangelo: Well supposing some of the others happened to drop by.

Pope: There were only twelve disciples altogether!

Pope: There were the twelve disciples and our Lord at the Last Supper. The Bible clearly says so.

Michaelangelo: Well you see, I like them. They fill out the canvas. I mean, I suppose we could lose three or four of them. You know, make one or two of them into…

Pope: There were only twelve disciples…

Michaelangelo: There must’ve been one. I mean, if there was a last one, there must have been one before that, right?

Michaelangelo: Right! So this is the Penultimate Supper. The Bible doesn’t say how many people were there, does it?

Michaelangelo: Yeah, well there you are!

Pope: Look, the Last Supper is a significant event in the life of our Lord. The Penultimate Supper was not. Even if they had a conjurer and a steel band. Now I commissioned a Last Supper from you, and a Last Supper I want.

Pope: With twelve disciples and one Christ.

Pope: Yes, one! Now will you please tell me what in God’s name possessed you to paint this with three Christs in it?

Pope: It does not work!

Michaelangelo: It does, it looks great! The fat one balances the two skinny ones!

Pope: There was only one Savior.

Michaelangelo: Well I know that. Everyone knows that. But what about a bit of artistic license?

Michaelangelo: I’ll tell you what you want, mate. You want a bloody photographer! Not a creative artist with some imagination!

Pope: I’ll tell you what I want: I want a Last Supper with one Christ, twelve disciples, no kangaroos by Thursday lunch, or you don’t get paid!

Pope: Look, I’m the bloody Pope! I may not know much about art, but I know what I like!