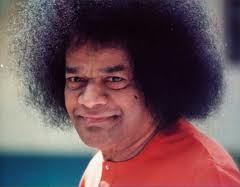 The Times of India reports that  Sai Baba, one of India’s most famous Godmen, died last Sunday.

Now, to put this in context, he was listed by the Watkins Review as one of the 100 most spiritually influential people in the world (yea, I’m also bothered by that meaningless word “spiritually”, but worry not, the review itself does not mean very much, its just a bookshop review). OK, lets try a few more numbers. There is a claim that he had about around 6 million adherents, and his organization, the Sathya Sai Organisation, reports that there are an estimated 1,200 Sathya Sai Baba Centers in 114 countries worldwide. I’ll not quibble about these numbers, not because I think they are right, (I suspect not), but rather … I simply don’t care to quibble about such numbers. The fact that I don’t dispute is that he had quite a following, and apparently that included presidents and prime ministers from India and beyond.

OK, so lets put our skeptical hats on and take a quick tour.

He claimed to have paranormal powers and to be able to work miracles. Two of his favorite “miracles” were to make ashes materialize for poor people, and to make jewelry materialize for rich people.(Personally that feels to be the wrong way around to me).

The film “Guru Busters” (Equinox) demonstrated that these alleged miracles were little more than a magician’s parlor tricks. Not sure about that? OK then, here is a video extract where he is caught on camera palming an artifact that he claims to have magically materialized. (Click here to watch the video clip)

However, the fact that he is a fraud and uses cheap tricks is not the real cause of concern here, for he has been hiding a far darker secret. He was actually a dangerous sexual predator. Numerous former followers have alleged that he sexually abused them or their families. Here is a link to a BBC documentary from 2004 that revealed these facts. You can find a full transcript at that link. The central theme of the BBC documentary was Alaya Rahm’s sexual abuse allegations against Sathya Sai Baba. They interviewed him together with Mark Roche, who had devoted 25 years of his life since 1969 to the movement and alleged abuse by Sai Baba.

Other sources of Information.

Final Observation – there is hope for rationality

Premanand, the famous Indian Skeptic, took on this so-called godman by performing his so-called miracles in public and explaining the tricks behind them. He trained thousands of volunteers to perform these and they started doing the same all over the country to demonstrate to the common man how they are done.

So now he is finally gone, we are left to muse over the tragedy of so many wasted and destroyed lives that were blindly led into complete ignorance by this fraud. The world truly now is a better place, not because he was ever here, but rather because he is now gone.