As far as Bullshit Detection goes, I appear to be on a bit of a roll at the moment. I blogged here about spotting woo words a week ago, and that resulted in some interesting debate in reddit, so I’ve added an update to that original woo-words posting.

OK then, so what else can we add to our “Bullshit detection kit”? Well how about developing a healthy respect for evidence and learning to be skeptical about claims that are backed with nothing except credentials. 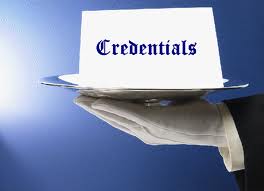 You do of course appreciate that you can obtain a degree in just about anything without actually studying or passing any exams; just pay the appropriate fee and become instantly accredited. A great example is Thunderwood college. This is a site run by Brian Dunning of Skeptoid and offers you free instant degrees. Brian is not attempting to con anybody, he simply designed the site to drive home the point that many credentials are bogus and meaningless. The mainstream academic community will of course issue valid degrees as proof that the recipient has acquired a specific level of knowledge. Unfortunately, there are also thousands of others churning out worthless credentials not recognized by the academic community, so unless the credentials are from an institution that is recognised by the mainstream academic community as an accredited organization, its meaningless.

What about real degrees from a fully accredited college, does that guarantee credibility? Not necessarily, there are some recognised and fully accredited institutions that not only teach science and arts, but also teach quack topics such as chiropractic, homoeopathy and acupuncture.

OK, so lets take it to the next level and assume that we are dealing with a valid science degree from a fully accredited college for a recognised mainstream science or arts topic. Is this a rock solid guarantee of an individuals integrity? Alas no, we are not there yet. There are fully accredited individuals who are completely nuts, thus proving that even the smartest folks might not necessarily be playing with a full deck of cards.

Lets try and tighten this up even further. Perhaps we should also check to see if the individual in question is a member of a professional body. Such a membership would imply some additional integrity because the assumption is that such bodies toss the nutters out and ban them from membership.

Unfortunately, even this is not enough. There are many “professional” organizations out there that only require a fee to join and don’t check anything. Take for example the “American Association of Nutritional Consultants”. Past membership has included such notables as Sassafras Herbert, Charlie Herbert and Henrietta Goldacre. Er sorry, who exactly are they? Well the first two are the household pets of Dr Victor Herbert and the last is Dr Ben Goldacre’s pet cat who was deceased prior to membership. In other words, pay the joining fee and any creature can become a member; that apparently includes non-humans. As long as they collect their yearly dues, being dead is also not a bar to membership

What about superlative terms such as “The worlds foremost expert in ….”, or “The UK’s leading ….”. Unfortunately such terms don’t help at all. Nobody verifies or polices such claims, so anybody can make such statements without having to prove anything. As for the term “Nobel Prize Nominee”, well that’s just outright fraud. The statutes of the Nobel foundation strictly stipulate that information about nominations must not be disclosed for up to fifty years after nomination. [see Paragraph 10 within the Nobel Foundation statutes – http://nobelprize.org/nobel_organizations/nobelfoundation/statutes.html ]

So where does all this leave us? Well obviously a degree from a non-accredited school or membership of a professional body that accepts the dead or family pets as members should indeed raise a very large red flag. However, even if the degree is real and the individuals peers worship the very ground he/she walks upon, you should never consider that to be justification for any claim. Smart people sometimes stray outside their sphere of expertise and make some very dumb pronouncements, recommendations or endorsements.

The bottom line is this. When assessing any claim, hearing it from a reliable well-recognised accredited source is a good reason to consider it, but that should only be a starting point. In the end what really matters is evidence, not credentials.