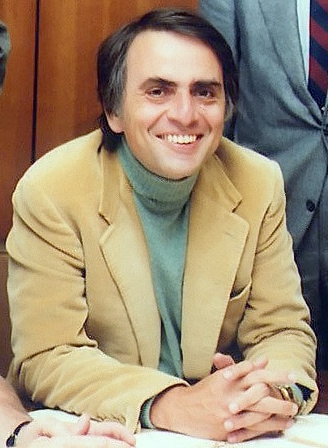 Carl Sagan had a wonderful mind that was capable of cutting through all the noise and clearly communicating and inspiring millions. He may indeed be sadly missed, but his words and thoughts still echo loudly even today.

If, and I confess it is possible, you are wondering … “Who?”, well OK here is a quick biographical summary (that I just shamelessly nicked from his Wikipedia page) …

Carl Edward Sagan (/ˈseɪɡən/; November 9, 1934 – December 20, 1996) was an American astronomer, astrophysicist, cosmologist, author, science popularizer and science communicator in astronomy and natural sciences. He spent most of his career as a professor of astronomy at Cornell University where he directed the Laboratory for Planetary Studies. He published more than 600 scientific papers[2] and articles and was author, co-author or editor of more than 20 books. He advocated scientific skeptical inquiry and the scientific method, pioneered exobiology and promoted the Search for Extra-Terrestrial Intelligence (SETI).

Sagan is known for his popular science books and for the award-winning 1980 television series Cosmos: A Personal Voyage, which he narrated and co-wrote.[3]The book Cosmos was published to accompany the series. Sagan wrote the novel Contact, the basis for a 1997 film of the same name.

So anyway, I’m drifting a tad off topic, time to focus.

If you wish to have a few quick easy rules for detecting bullshit, then you should consider embracing Carl Sagan’s Baloney Detection Kit, because it is a fabulous bit of clear distinct guidance … (Oh and yes, he was polite, so he used the word “baloney” instead of “bullshit”).

Within his rather famous book, The Demon-Haunted World: Science as a Candle in the Dark (link to public library) there is a chapter entitled “The Fine Art of Baloney Detection,” where he describes how easily we can all be fooled, and then goes on to explain that scientists have been trained to cope with this reality. They have been equipped with what he terms a “baloney detection kit” – in other words, here is some very practical guidance on how to work out what is and is not bullshit.

Key Point: He argues that this is not simply for scientists, but is for all of us to use whenever faced with ideas or claims. … I agree.

So when faced with any ideas or wild claims, then here is his well-proven cognitive toolkit that you can deploy

6 thoughts on “Detecting Bullshit – A quick refresher from Carl Sagan”