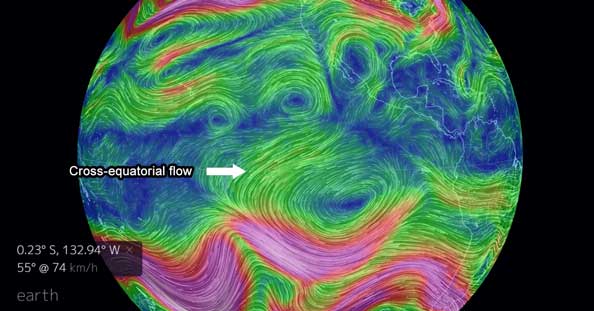 The UK’s Independent reports the rather startling news that …

Environmental scientists have declared a “global climate emergency” after the Northern hemisphere jet stream was found to have crossed the equator, bringing “unprecedented” changes to the world’s weather patterns.

Robert Scribbler and University of Ottawa researcher Paul Beckwith warned of the “weather-destabilising and extreme weather-generating” consequences of the jet stream shift.

The scientists said the anomalies were most likely precipitated by man-made climate change, which caused the jet stream to slow down and create larger waves.

That sounds all rather dire, but before you flee to your bunker in the hills I would advise you to pause and consider if it is actually as serious as described.

What is the source?

Robert Scribbler blogs about it here and that appears to be the source.

They are both well-known bloggers and generally both have an overall quite positive reputation.

Two bloggers have made a stunning claim that has spread like wildfire on the Internet: They say the Northern Hemisphere jet stream, the high-altitude river of winds that separates cold air from warm air, has done something new and outrageous. They say it has crossed the equator, joining the jet stream in the Southern Hemisphere. One said this signifies that the jet stream is ‘wrecked‘, the other said it means we have a “global climate emergency.”

But these shrill claims have no validity — air flow between the hemispheres occurs routinely. The claims are unsupported and unscientific, and they demonstrate the danger of wild assertions made by non-experts reaching and misleading the masses.

The two bloggers who have perpetuated this misinformation are Robert Scribbler, who describes himself as ” a progressive novelist, non-fiction writer and emerging threats expert,” and Paul Beckwith, who is working on a PhD with “a focus on abrupt climate system change” at the University of Ottawa.

… the hypothesis that global warming is destabilizing the polar jet stream is a legitimate idea that has been published in peer-reviewed journals, though it remains controversial. But even the scientist who developed the hypothesis, Jennifer Francis, a professor of meteorology at Rutgers University, suggested it had been misapplied by Scribbler and Beckwith. “I’d say cross-equator flow cannot be unprecedented, maybe not even all that unusual,” she said.

In other words … oops. Yes Scribbler and Beckwith are both passionate and yes, much of what they write is fascinating and interesting and often right, but alas not this time, they got this wrong. It happens, it really does.

Robert Scribbler has now amended his posting with an update …

the inference taken from my article was somewhat misconstrued. Stating that a global climate emergency due to loss of seasonality is currently upon us and is far-reaching. The message in my article is that the situation appears to be worsening and that this particular global climate crisis may be something that we’ll face over the coming years and decades. The article was intended to highlight the risk posed by weakening dividing lines between climate zones, an apparent observed increase in meridional upper air patterns, and in this case, an observation of the upper-level wind pattern that crossed from pole to pole.

Meanwhile, Paul Beckwith is sticking to his stance and has promised a rebuttal to the Washington Post article.

We might hate the peer review process, but it does generally work. To consume something, anything, any idea, ask yourself if it has been truly vetted, robustly scrutinised, and survived. The idea that we have a jet stream shift underway that will end winter/summer cycles is a truly extraordinary claim and so if it is to gain any traction then there needs to be compelling evidence that verifies it. In this instance the subject matter experts are just not finding that to be the case.

As for the media, the Washington Post nailed it so please give them some applause there. In contrast to that, the UK’s Independent really did get it very wrong. They simply picked it up and ran with it without really checking with anybody, and that is perhaps in one sense understandable because  such headlines do make good clickbait.

One rather embarrassing fact

The first to actually debunk this was Roy Spencer …

A “jet stream” in the usual sense of the word is caused by the thermal wind, which cannot exist at the equator because there is no Coriolis force. To the extent that there is cross-equator flow at jet stream levels, it is usually from air flowing out of deep convective rain systems. That outflow often enters the subtropical jet stream, which is part of the average Hadley Cell circulation.

There is frequently cross-equatorial flow at jet stream altitudes, and that flow can connect up with a subtropical jet stream. But it has always happened, and always will happen, with or without the help of humans. Sometimes the flows connect up with each other and make it look like a larger flow structure is causing the jet stream to flow from one hemisphere to the other, but it’s in no way unprecedented.

Now here is the real kicker here. The guy pointing out that this was nonsense and explained why is a climate change skeptic. In other words he is generally wrong about many things, but was quite right about this. In contrast, the bloggers, Beckwith and Scribber, who are generally right about most things, were quite wrong about this.

What is also important to remember is that AGW is not a belief, nor is it a club whose members must be defended no matter what they say. AGW is where the evidence points and that is what it is the prevailing consensus. Mr Spencer does not agree and suggests it is all natural variance and not caused by humans, but the evidence is simply not there for that hypothesis.

In the end what matters is not membership of the right faction, but rather what does all of the available evidence when taken together lead us to?