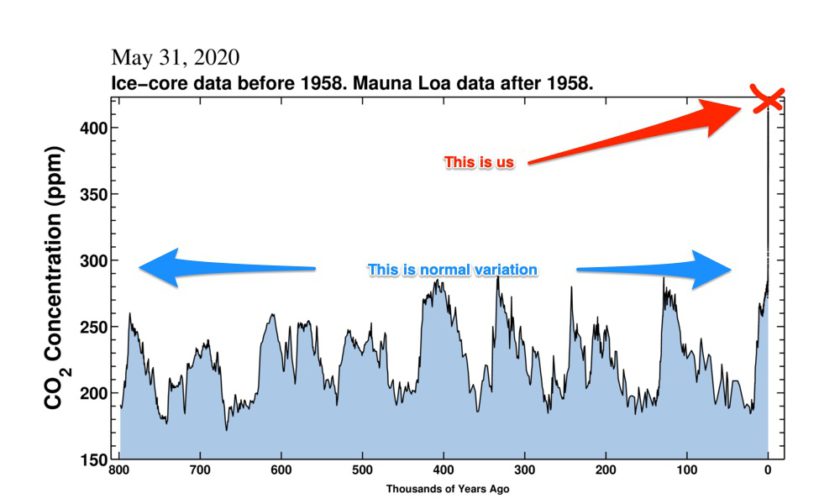 Via Ice Core data it is possible to very accurately measure the level of CO2 within our atmosphere over the last 800,000 years. This is how we can have a chart such as the one above the illustrates that our emissions are unprecedented in that period.

A new paper however has used a very different method to go far further back in time. Let’s take a look.

Published in GeoScience world on May29, 2020, the paper explains how a new study used a novel method to conclude that today’s carbon dioxide levels are actually higher than they have been for the past 23 million years.

The team used the fossilized remains of ancient plant tissues to produce a new record of atmospheric CO2 that spans 23 million years of uninterrupted Earth history. They have shown elsewhere that as plants grow, the relative amount of the two stable isotopes of carbon, carbon-12 and carbon-13 changes in response to the amount in the atmosphere. This research, published this week in Geology, is a next-level study measuring the relative amount of these carbon isotopes in fossil plant materials and calculating the carbon dioxide concentration of the atmosphere under which the ancient plants grew.

The study by Brian Schubert (University of Louisiana at Lafayette) and coauthors Ying Cui and A. Hope Jahren, has created a new CO2 “timeline”. This has revealed no evidence for any fluctuations that might be comparable to the dramatic increase of the present day, which suggests today’s abrupt greenhouse disruption is unique across recent geologic history.

In the context of that timescale, our current emission levels are unique.

The implication here of this is that the substantial global warmth of the middle Pliocene (5 to 3 million years ago) and middle Miocene (17 to 15 million years ago), which are sometimes studied as a comparison for current global warming, were associated with only modest increases.

Because major evolutionary changes over the past 23 million years were not accompanied by large changes in CO2, perhaps ecosystems and temperature might be more sensitive to smaller changes than previously thought.

One of the most pressing messages that climate scientists attempt to convey to the public is that current CO2 is elevated compared to the geologic past. The fact that current CO2 is higher than it was at any time during the past ∼800 k.y. is a straightforward claim based upon direct CO2 measurements from ice cores and the Mauna Loa Observatory;

claims associated with the more distant geologic past have been variable, partially based on a lack of consensus within the paleoclimate community. Statements addressing values from 3 m.y. ago to 15 m.y. ago can be found, contributing to public confusion and skepticism.

Our results support the claim that CO2 has been lower than present-day values at least across the past 7 m.y., and potentially during the entirety of the past 23 m.y.; however, CO2 likely never fell below levels experienced during the greatest ice-sheet advances of the Pleistocene. Our results also indirectly imply that the major reorganizations of plant, animal, and hominid ecosystems were not driven by large-amplitude changes in CO2. More meaningful, perhaps, is the inference that these reorganizations could have impelled, or been impelled by, relatively small-amplitude changes in CO2.

Our CO2 record differs from that gained by prior proxies in that it was produced from substrates that span 23 m.y. of uninterrupted Earth history. Our results also show good agreement with discontinuous marine and terrestrial CO2 proxies, suggesting that the validity of the proposed mechanism underlying the effect of CO2 on δ C values may be comparable to those of these previously confirmed CO2 proxies. Compared to these methods, however, our proxy has the advantage of relying upon a substrate (terrestrial fossil organic carbon) that is widely available both spatially and temporally, allowing the possibility for a near-continuous reconstruction of CO2 across the entire evolution of C3 land plants.