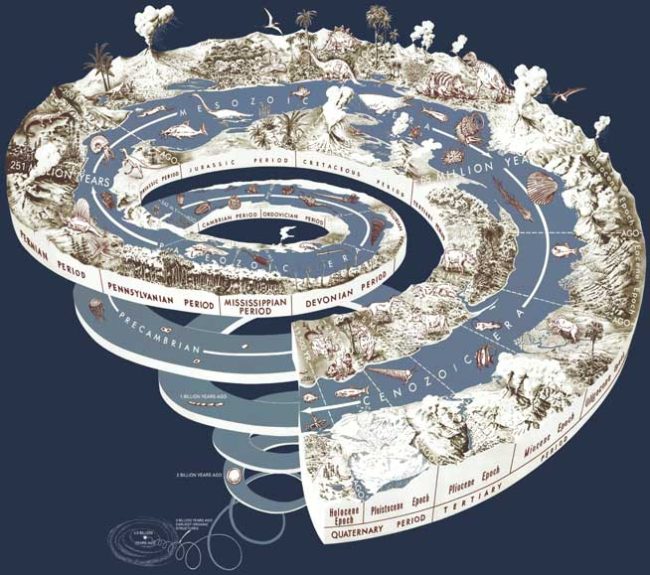 It sounds weird, and quite bizarre, but the core of our planet is younger than the surface.

We know that planet earth is only 6,000 years old because the Bible says ….

How do we know how old the earth actually is?

In 1892, Lord Kelvin estimated the age to be 100 million years and used thermal gradients to derive that estimate. What he did not know about was radioactivity, and nor did he know that beneath the crust was a fluid mantel that invalidated the assumptions he was making. In 1895, John Perry, took into account the convective mantle and arrived at a more reasonable estimate of 2-3 billion years. Kelvin was not convinced and stuck with his original estimate.

In the early 1900s when  Marie and Pierre Curie announced the discovery of radioactive elements, the penny dropped within the Geological community, because this more or less scuppered previous estimates. Previously the assumption was that heat was being slowly dissipated, but this now was a source that would renew that heat, and thus any previous estimate was clearly wrong.

In 1907, the discovery of radioactivity also gave birth to radioactive dating, a way of working out how old rocks actually were. Basically, the concept is this, when a rock first forms it will include very tiny amounts of elements that are radioactive and decays at a constant rate, so by measuring that decay rate you can derive the actual age of the sample. There are many different variations that work well on different timescales, and so when combined you can begin to piece together a complete history of the planet.

In 1927, Arthur Holmes, published The Age of the Earth, an Introduction to Geological Ideas with a range of 1,6 to 3 billion years and this great added to the weight of evidence that radioactive dating

In 1931, the National Research Council of the US National Academy of Sciences initiated a study to nail the age once and for all. Holmes was not only part of that, but ended up writing most of the final report himself.

By 1956, Clair Cameron Patterson used meteorite samples and published an age of age of 4.55 ± 0.07 billion years … and that is very close to our current understanding. The problem with using samples from the surface of the earth is that the crust is constantly changing and being replaced, so using meteorite samples that have been around since the beginning of the solar system was an idea that advanced yet again our understanding.

So step by step, bit by bit, more evidence is gathered, and many more measurements were taken, until it become clear that Earth and the rest of the Solar System formed at around 4.53 to 4.58 billion years ago.

Do we have any independent and quite different means for verifying this date?

Actually yes we do because helioseismic methods have been used to also establish a date for the ago of the sun, and they strongly agree with the radiometric dates found for the oldest meteorites.

OK so what about the Core being younger than the surface?

Ah, now this is where things take an interesting turn. Here the physicists have stepped in instead of the Geologists.

Einstein’s general theory of relativity establishes that the rate at which time flows is relative to your position within a gravitational field, and this is not simply an abstract idea, but rather a very practical one that impacts us all. If we did not take account of this then the GPS within your smart phone would not actually work, so we know it is observationally correct.

Yep, here is the paper that has just been published with this calculation …

We treat, as an illustrative example of gravitational time dilation in relativity, the observation that the center of the Earth is younger than the surface by an appreciable amount. Richard Feynman first made this insightful point and presented an estimate of the size of the effect in a talk; a transcription was later published in which the time difference is quoted as ‘one or two days’. However, a back-of-the-envelope calculation shows that the result is in fact a few years. In this paper we present this estimate alongside a more elaborate analysis yielding a difference of two and a half years. The aim is to provide a fairly complete solution to the relativity of the ‘aging’ of an object due to differences in the gravitational potential. This solution – accessible at the undergraduate level – can be used for educational purposes, as an example in the classroom. Finally, we also briefly discuss why exchanging ‘years’ for ‘days’ – which in retrospect is a quite simple, but significant, mistake – has been repeated seemingly uncritically, albeit in a few cases only. The pedagogical value of this discussion is to show students that any number or observation, no matter who brought it forward, must be critically examined.

Now that last point is very important. Feynman calculated it to be just a few days back in the 1960s and since it was Feynman then it just must be right?

Wrong, because no matter who said it, if something is wrong, then it is wrong, and so everything should be critically examined …

In science, one route to becoming famous is being right on some important topics. However, just because someone has become famous, this person is evidently not necessarily right on all matters. Feynman himself would most likely have agreed with this and he would probably not have fallen for his own miscalculation: For a long time, his own theory of beta decay was at odds with the then prevalent, but false, understanding of existing experimental results. Upon finally realizing and correcting this community-wide misunderstanding Feynman wrote: ”Since then I never pay any attention to ”experts”. I calculate everything myself.” [15]. And when faced with a mistake of his own, he put it even more bluntly: ”What it says in the book [I have written] is absolutely wrong!”

I should also add that Feynman was the first to point out this time dilation effect, and so even if he got the maths wrong, he was right about this being real. The fact that the core of the planet is actually years younger than the surface is of course fascinating, but this in the end is also a lesson that even those we deeply respect can also be wrong.

Incidentally, they applied the same calculations to the sun and discovered that the core is 40,000 years younger than the surface.

PDF for the paper is here.