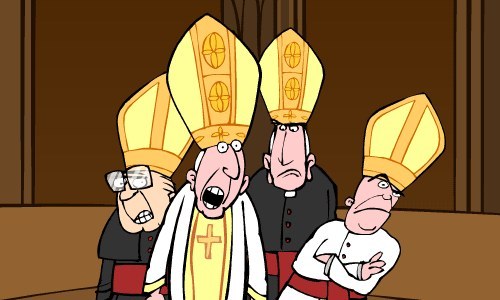 With the publication of the Church of England’s intention to sanction the US Episcopal Church over the latter’s sympathetic stance towards equal marriage, the C of E is quite out of step with UK Law and indeed common humanity. Thus we feel strongly these bishops have no place in our government.

The detail of the C of E’s new action is set out in the Guardian here: http://www.theguardian.com/world/2016/jan/14/anglican-church-sanctions-against-liberal-us-church-same-sex-marriage?CMP=share_btn_fb

The rights of the C of E’s bishops to sit in the House of Lords is set out here: https://www.churchofengland.org/our-views/the-church-in-parliament/bishops-in-the-house-of-lords.aspx

Sorry to those outside the UK, but this is only for those that live within the UK, it is not just a random internet poll, but is a formal petition on the UK Government website. When you click “Sign The Petition“, you will be asked to verify that you are a UK citizen and provide both an email address and also your UK address. You then need to click a link within an email sent to you to validate it.

Will a petition like this change anything at all?

Perhaps, the reason signing it is so hard is because if it gains enough momentum then it initiates some activity …

Yes indeed, if you happen to have an imaginary friend, have made a career out of that, and have risen to the top, then you get to sit in the UKs House of Lords and interfere in government business.

The formal title for them is Lords Spiritual and is essentially a medieval relic that is still in place and fully operational, but is no longer of any relevance.

We might often point the finger at places like Iran and Saudi Arabia and vocally criticise them because they permit clerics to hold power and dictate government policy, but when we do so we should perhaps pause and consider that we have exactly the same setup. We happen to have a bit of an advantage in that our clerics have been tamed and tend not to burn people at the stake anymore, but what has become clear recently is that by cutting off the US Episcopal Church they have demonstrated that their official stance is still that of “homophobic bigot”.

The UK is the only western democracy that still permits unelected religious clerics to hold such a position of influence within a legislature, and that is quite frankly absurd – now is the time for change, so if you can, please do sign it.