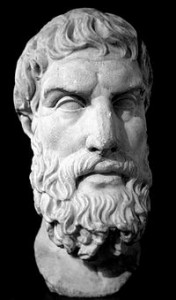 The word Omnipotent is a rather large word that can befuddle normal human beings, what they heck does it actually mean? Well it basically comes from smacking two Latin words together, Omni and Potens, or “All Power”, and is used to describe a supernatural entity that has unlimited power and can do anything … and I mean anything. Need another Universe, OK “poof”, there done. Break a few laws of Physics, no problem, clicks fingers and voila. Anything, absolutely anything you can imagine, is possible.

Now, lets ask ourselves a rather interesting question. Is it possible for such an entity to exist? To answer that, lets start with an observation about the world  around us. Lots of bad things happen in the world, so if this supernatural entity existed then we have just four distinct possibilities to consider. Lets look at each in turn.

Possibility 1: God wants to make all the bad stuff go away, but is not able to. – If this is true, then God is not Omnipotent

Possibility 2: Perhaps God can indeed make all the bad stuff go away, but does not want to – If correct, this makes God truly wicked.

Possibility 3: God can indeed make all the bad stuff go away, and indeed is willing to do this. – This can’t be correct, because we obviously still have lots of bad stuff happening.

Possibility 4: God does not want to make all the bad stuff go away, and even if he did, he would not be able to do so. – If this is correct, then why call this entity God.

There are no other choices. You can of course attempt to make it all fuzzy and befuddle folks with lots of latin words, but if you boil it all back down and strip away the religious jargon you end up right back here with no logical place for an Omnipotent supernatural entity.

Now, for the believers out there, this is the part where you label me as one of those strident new atheists and deem this to be some modern tosh pulled out of the latest “God is Dead” book. Sadly, I have some really bad news for you. this is not at all new in any way. The above observation was first made a very very long time ago. So here we are after thousands of years of deep theological thinking by all the greatest Christian and Non-Christan thinkers, yet nobody has ever come up with an appropriate reply, it still stands.

It is commonly attributed to Epicurus in 341 BCE, and I can understand why, because he was a chap well ahead of his time. He taught that the purpose of philosophy was to attain a happy and tranquil life surrounded by friends. For him death was the end and should therefore not be feared, that the gods do not reward or punish humans, that the universe is infinite and eternal, and that events in the world are ultimately based on the motions and interactions of atoms moving in empty space. He is also a key figure in the development of science and the scientific method because of his insistence that nothing should be believed, except that which was tested through direct observation and logical deduction. However, there is the distinct possibility that it might not be from him, because there is no clear evidence that it was. Lactantius (An early Christian writer and mentor for the Roman emperor Constantine) claimed it was him, but there is a strand of thought that he may have been wrong about that.

The oldest clear statement of it comes from the writings of Sextus Empiricus (160-210 AD), the Roman philosopher, whose writings are the most complete account of ancient Greek and Roman skepticism. Now I do hope you are beginning to appreciate that there is nothing modern about being a skeptic, it goes a long way back into the ancient world. So when Sextus wrote down this observation, he was simply recording thoughts from the ancient Greek skeptics.

OK, lets not get too hung up on who first made this observation, regardless of who it was, it still stands. And as regards the potential authorship for it, the fact that specific Greek skeptics did or did not make this observation will make no difference to their reputation, they were still great thinkers in their time.

Are you curious to find out more? If so, then you have a few names to work with now … hint: Google is your friend, so go follow the trail and see where it takes you.

But finally, when faced with claims regarding the existence of a supernatural entity … be skeptical.

Oh, and least I forget, here is the original quote:

“Is God willing to prevent evil, but not able? Then he is not omnipotent.

Is he able, but not willing? Then he is malevolent.

Is he both able and willing? Then whence cometh evil?

Is he neither able nor willing? Then why call him God?”

1 thought on “Is there any logical room for an Omnipotent God?”