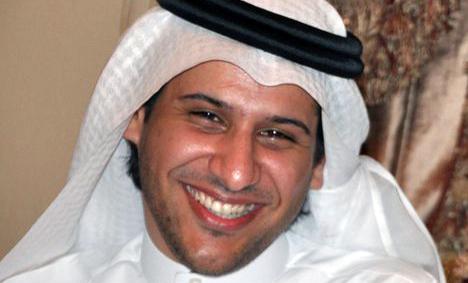 Amnesty International is highlighting the case of the Saudi Human Rights activist Waleed Abulkhair and they have a petition for you to sign.

They explain what has happened to him …

On 6 July 2014, Waleed was sentenced to 15 years in prison, a 15-year travel ban and a fine of 200,000 Saudi Arabian riyals (over £35,000) as punishment for his human rights activities – including holding discussions about human rights in his home, defending those who have been punished for speaking out, and signing a letter that criticised authorities for imprisoning a group of activists who had peacefully advocated democratic reform.

Waleed was found guilty of numerous charges by a judge in a security and counter-terror court, including:

Waleed had refused to accept the charges put to him by the Saudi Arabian authorities throughout his trial, which began in October 2013, or to recognise the legality of the court he was being tried in.

Halfway through his trial, in February 2014, Saudi Arabia brought in new anti-terrorism law, which the courts applied to Waleed’s case. He is the first human rights activist to be tried and sentenced under the new law, which extended existing laws used by courts to crack down on free speech through overly vague definitions of ‘terrorism’ – and legitimised and ramped up the punishment against human rights activists like Waleed.

In January 2015, the appeal judge told Waleed that he would serve the full 15 years in prison, rather than a reduced sentence of ten years, as he had refused to apologise for his alleged offences.

When Waleed was arrested in April 2014, he was initially taken to al-Ha’ir prison in Riyadh, where it is believed that he was placed in solitary confinement and deprived of sleep by constant exposure to bright lights.

Waleed says he’s been beaten in prison and denied food. He also suffers from diabetes, for which he needs special treatment and a special diet, which have not been provided by the authorities.

You can read more about him on his Wikipedia page here.

What exactly is Waleed Abulkhair guilty of?

He is indeed guilty … he is guilty of being a decent human being who was and is prepared to defend others who have been falsely accused and so he stood up to defend them.

One of the very last cases he handled was that of Raif Badawi, the Saudi blogger who was also “guilty” of daring write on his blog a call for the reform of the system that currently prevails in Saudi Arabia. Raif was sentenced to not only 10 years in jail for the “crime” of blogging, but was also sentenced to be taken out into the public square each and every Friday to be whipped 50 times.

In addition to that absurd human rights abuse, his lawyer, Waleed Abulkhair, has now also been jailed.

Are things really that bad in Saudi Arabia?

The short answer is “yes”.

The slightly longer answer is that their track record for human rights is utterly appalling in so many different ways and is perhaps the very worst on the planet, to be specific …

Can’t the UN Human Rights Council do something?

No, basically because Saudi Arabia not only has a seat on that council, but they also run the committee that selects independent experts.

“It is scandalous that the UN chose a country that has beheaded more people this year than ISIS to be head of a key human rights panel. Petro-dollars and politics have trumped human rights.” – UN Watch executive director Hillel Neuer

So what can we do?

Blog about it all, speak about it, shout it loudly, and throw a spotlight upon the darkness that prevails.

Drawing public attention to such injustices does make a difference.