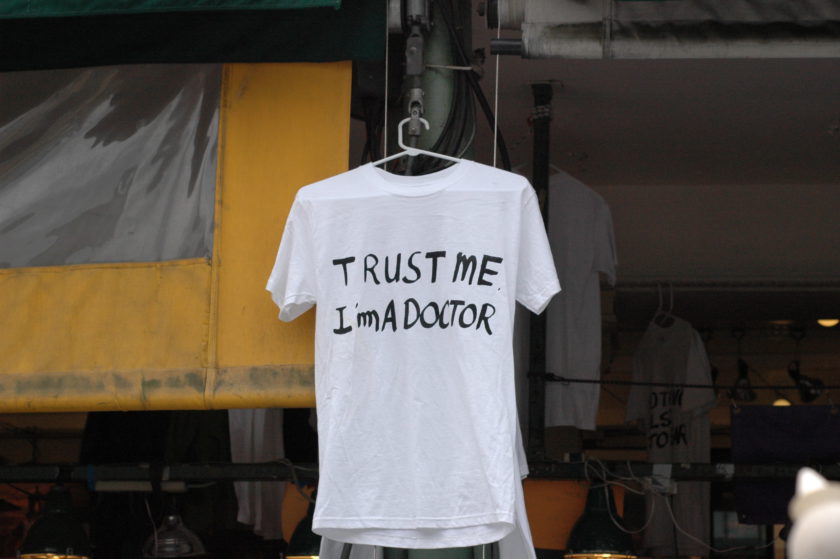 In many department stores you will find young ladies within the cosmetics section wearing white lab coats. It is designed to craft the illusion of authority and so instil your confidence in what they are selling. They don’t claim to be either a scientist or a doctor and so the illusion is all in the head of they buyer. Imagine if they did claim to be medically trained, what then? Well, that would be crossing the line from sales psychology into the territory marked “fraudulent”. This is basically what Naturopaths do.

What exactly is a Naturopath?

Naturopathy is alternative medicine, and is not medicine.

That’s basically the polite way of saying that these are folks who promote quackery, the stuff that does not actually work. It’s actually a bit worse than just that. Often they will not simply promote things that don’t work, but they will actively recommend against real medicine, the stuff that does work. If you doubt me then check out the well-referenced Wikipedia page on the topic that opens as follows (then goes into a lot more quite shocking detail) …

Naturopathic medicine is considered by the medical profession to be ineffective and possibly harmful, raising ethical issues about its practice.[6][8][9]In addition to accusations from the medical community, such as the American Cancer Society,[10] naturopaths and naturopathic doctors have repeatedly been accused of being charlatans and practicing quackery.[6][11][12][13][14][15] Over the years, many practitioners of naturopathic medicine have been found criminally liable in the courts of law around the world. In some countries it is a criminal offense for naturopaths and naturopathic doctors to label themselves as medical professionals.

What do they advocate?

Well, that same Wikipedia article lays it all out in great detail. It is a long list of methods. many of which have no evidence that they actually work …

Naturopaths are often opposed to mainstream medicine and take an antivaccinationist stance.[9]

A 2004 survey determined the most commonly prescribed naturopathic therapeutics in Washington State and Connecticut were botanical medicines, vitamins, minerals, homeopathy, and allergy treatments.[39] A examination published in 2011 of naturopathic clinic websites in Alberta and British Columbia found that the most commonly advertised therapies were homeopathy, botanical medicine, nutrition, acupuncture, lifestyle counseling, and detoxification.[40]

One important point to note is that Naturopaths are quite sincere in their beliefs that they are medically trained and that they are doing good. The problem is that it costs anything between $15K and $40K per year to be trained in what feels like a medical school to learn the fine art of quackery that is dressed up to feel like real medicine. Once you invest a huge amount and money and time it becomes almost impossible to come to terms with it all being a sham, and so those who do go down that path generally rationalise it all by sincerely believing in it all. But don’t be fooled by the existence of this supposed medical training via institutions that pretend to be a university.

There is some news on Naturopathy from Canada.

There has been a case going on in which the New Brunswick College of Physicians and Surgeons had sought an injunction to stop naturopaths in Moncton, Fredericton and Miramichi from using terms such as “medical practitioner” and “family practice” to describe themselves or their services.

The latest update is that they won, the judge has ruled that Naturopaths in New Brunswick cannot advertise themselves as “medically trained,”. CBC explains that this is not an attempt to ban them, but instead seeks to stop them from fraudulently claiming to be medically trained doctors …

“The college has no interest in preventing naturopaths from doing what they do,” said lawyer John Barry, who represented the College of Physicians and Surgeons in the application.

“But if it appears to the public that they are separate but equal alternatives to conventional medicine, that is why we are here today.”

… Some of the naturopaths advertised themselves online as “doctors” or in “general family practice,” and as specializing in the treatment of certain illnesses including angina, cancer and diabetes….

… “They’re dealing with cancer, chemotherapy … and people will try anything,” Schollenberg said.

“Some of them have been told, ‘Well, your cancer is all gone, it’s better,’

“There’s no way you could just say it by looking at people or examining them most of the time. These people have stopped with the treatment they were getting, and then some have died.”

Criticism of this quackery is important. If you are advised by somebody touting a medical credential, but they actually promote stuff that does not work, then the consequences for you can be potentially dire.