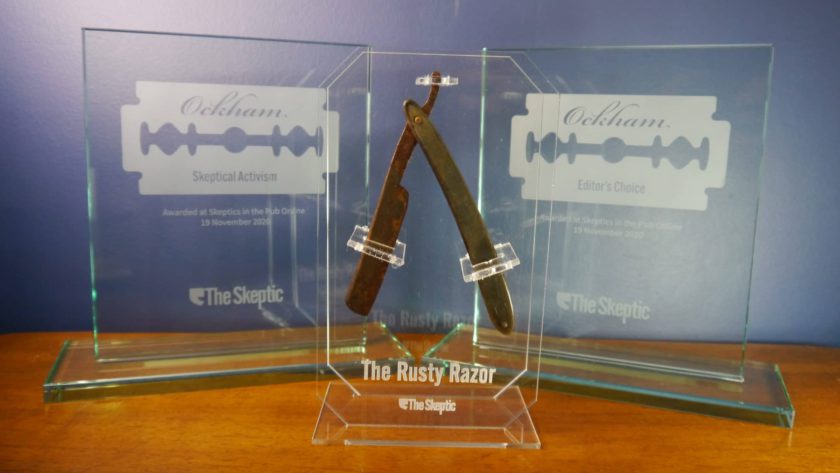 Each year a Rusty Razor award is given to the year’s worst promoter of pseudoscience. The term “Rusty Razor” is of course a nod to Occam’s razor, a problem-solving principle that states, (if I may paraphrase), the simplest explanation is usually the right one.

The award is bestowed by the UK magazine “The Skeptic” as part of a series of Occam awards each year.

He wins for his flawed study that promoted the use of the malaria drug hydroxychloroquine as a treatment for COVID-19.

Yes indeed a good choice, oh what fun we have all had with that. He is the alpha source of all the nonsense that has since flowed on the use of hydroxychloroquine for COVID-19

It was this study, that claimed that hydroxychloroquine reduced the viral load in patients with COVID-19 and that this effect was enhanced with azithromycin co-treatment. He presented this to the media via a press conference in March 2020, before any details were published in the journal International Journal of Antimicrobial Agents.

“We received a lot of nominations this year for world leaders like Donald Trump and Jair Bolsanaro, for promoting pseudoscientific COVID-19 cures – and in each case, their most prominent ineffective ‘cure’ was hydroxychloroquine, as a direct consequence of Raoult’s study.

“It is hard to find an example of quackery that has spread so far, influencing the public health response to a deadly pandemic and creating widespread confusion across the entire globe.”

“For his promotion of hydroxychloroquine, and the flawed science that formed the basis of that promotion, Raoult is a worthy winner of the 2020 Rusty Razor award for pseudoscience”.

Didier Raoult is an award winning microbiologist, so what went wrong here, where did he go off the rails?

Here is a brief timeline of the entire saga of misinformation …

The problem with the initial “study” is that his sample size was incredibly small, with only 6 patients given the hydroxychloroquine/azithromycin combination. The study was also found to be improperly controlled, and data was excluded for a number of patients whose condition worsened as they were either transferred to intensive care, or died.

Science by press conference is never at the best of times a good idea.

It took place via Zoom of course and not as is usual at the QED conference.

Beyond the Rusty Razor award there were also other far more positive awards.

The 2020 Ockham award for Skeptical Activism went to Dr Natalia Pasternak for her tireless work in Brazil during the COVID-19 crisis.

Brazilian scientist and activist Dr Natalia Pasternak has today been named the 2020 recipient of the Ockham Award for Skeptical Activism. Dr Pasternak, who is president of Brazil’s Instituto Questão de Ciência (IQC), was given the award for her work fighting health misinformation in Brazil.

She is on the Zoom meeting above accepting the award and is thrilled to receive it.

“The IQC, of which she is co-founder and President, has been a shining beacon of reason and critical thinking at a time when those things have been in short supply, and their work has reached people not just in Brazil, but across South America and across the world – an impressive accomplishment for an organisation which was only founded in 2018”.

The Editor’s Choice award went to Skeptics in the Pub Online for their support of the UK’s skeptical community throughout an extraordinary year.

“Ordinarily, the UK has a thriving scene of dozens of independent Skeptics in the Pub groups, each hosting monthly events in their respective cities. When COVID-19 hit, events across the country shut down, but those groups of volunteers – in their own free time and without financial reward – very quickly came together to organise weekly online events that run to a standard many professional event organisers would look upon with envy.

“These weekly events have attracted thousands of viewers, and have provided a regular point of contact for people throughout the uncertainty of the pandemic. They also serve to demonstrate the positive, supportive and collaborative skeptical community that exists in the UK.”