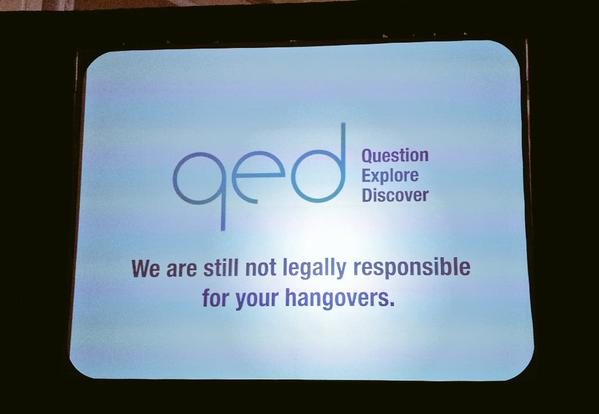 Initially started in 2011 by the Merseyside Skeptics Society, in conjunction with the Greater Manchester Skeptics Society, it has been running each and every year. It is a quite mind-expanding weekend, I can personally vouch for that.

To attend, it costs £99 for the weekend and they still have a few tickets available. If interested in finding out what will be happening, then …

To also get a feel for the buzz that is building up, you can also checkout …

Biggest and best will be this year

If that is still not enough, then remember that it is not just about all the formal talks, it is also all about hanging out with lots of fascinating people informally as well.

Careful, there's a risk we might end up ACTUALLY HAVING FUN at #QEDcon! #TheHorror

If you are going, then here are a few tips

I did once simply wander up to some folks hanging out in the lobby and asked them where they were going for dinner. When they told me, I said “Great, I’ll come with you”. Later, as we chatted over dinner, I asked which talks they had gone to and got blank looks. Apparently they were nothing to do with the conference, I have invited myself out to dinner with a few folks on a city break in the hotel.

A slightly out of date tweet, then are now down to just 6 tickets left.

We have 7 tickets left. That means Snow White could come, but she'd have to leave one of the dwarfs behind https://t.co/41VPtK97h6 #QEDcon pic.twitter.com/STNzpM0mfH