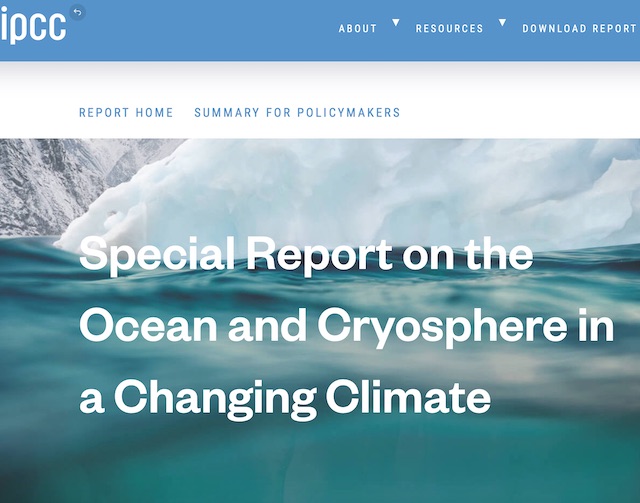 The latest Intergovernmental Panel on Climate Change (IPCC) Special Report, #SROCC, has just been published. If you keep you finger on the pulse of all things IPCC then you will have been expecting this. In fact, leaks of what it was going to say have already been floating about.

Published on 25th Sep 2019, this is a very comprehensive document. The statistics behind it will give you a sense of this …

You will of course be hearing a lot more via various media outlets in the days to come as the content is digested. However, very briefly here are a few rather important key revelations that I’ve pulled out of it all.

this in a nutshell (if a very dense one) is why we scientists are so totally freaked out: it indicates the changes in the environment (caused by GH gas emissions) are going to get much, much worse if we don’t get our shit together.

The above graphic comes directly from the “Summary for Policymakers” section of the report. (You can go to this page to pick bits or all of it to download)

But what is it telling us?

Global warming has already reached 1°C above the pre-industrial level, due to past and current greenhouse gas emissions. There is overwhelming evidence that this is resulting in profound consequences for ecosystems and people.

The ocean is warmer, more acidic and less productive.

Sea Level is rising at an accelerated rate

While sea level has risen globally by around 15 cm during the 20th century, it is currently rising more than twice as fast – 3.6 mm per year – and accelerating, the report showed.

“In recent decades the rate of sea level rise has accelerated, due to growing water inputs from ice sheets in Greenland and Antarctica, in addition to the contribution of meltwater from glaciers and the expansion of warmer sea waters,” said Valérie Masson-Delmotte, Co-Chair of IPCC Working Group I.

“This new assessment has also revised upwards the projected contribution of the Antarctic ice sheet to sea level rise by 2100 in the case of high emissions of greenhouse gases,” she said. “The wide range of sea level projections for 2100 and beyond is related to how ice sheets will react to warming, especially in Antarctica, with major uncertainties still remaining.”

Warming and changes in ocean chemistry are already disrupting species throughout the ocean food web, with impacts on marine ecosystems and people that depend on them, the report said.

To date, the ocean has taken up more than 90% of the excess heat in the climate system. By 2100, the ocean will take up 2 to 4 times more heat than between 1970 and the present if global warming is limited to 2°C, and up to 5 to 7 times more at higher emissions. Ocean warming reduces mixing between water layers and, as a consequence, the supply of oxygen and nutrients for marine life.

Marine heatwaves have doubled in frequency since 1982 and are increasing in intensity. They are projected to further increase in frequency, duration, extent and intensity. Their frequency will be 20 times higher at 2°C warming, compared to pre-industrial levels. They would occur 50 times more often if emissions continue to increase strongly.

Ocean warming and acidification, loss of oxygen and changes in nutrient supplies, are already affecting the distribution and abundance of marine life in coastal areas, in the open ocean and at the sea floor.

Shifts in the distribution of fish populations have reduced the global catch potential. In the future, some regions, notably tropical oceans, will see further decreases, but there will be increases in others, such as the Arctic. Communities that depend highly on seafood may face risks to nutritional health and food security.

“Cutting greenhouse gas emissions will limit impacts on ocean ecosystems that provide us with food, support our health and shape our cultures,” said Hans-Otto Pörtner, Co-Chair of IPCC Working Group II. “Reducing other pressures such as pollution will further help marine life deal with changes in their environment, while enabling a more resilient ocean.”

“Policy frameworks, for example for fisheries management and marine-protected areas, offer opportunities for communities to adapt to changes and minimize risks for our livelihoods,” he added.

The extent of Arctic sea ice is declining in every month of the year, and it is getting thinner. If global warming is stabilized at 1.5°C above pre-industrial levels, the Arctic ocean would only be ice-free in September – the month with the least ice – once in every hundred years. For global warming of 2°C, this would occur up to one year in three.

Some people living in the Arctic, especially indigenous peoples, have already adjusted their traveling and hunting activities to the seasonality and safety of land, ice and snow conditions, and some coastal communities have planned for relocation. Their success in adapting depends on funding, capacities, and institutional support, the report shows.

Permafrost ground that has been frozen for many years is warming and thawing and widespread permafrost thaw is projected to occur in the 21st century. Even if global warming is limited to well below 2°C, around 25% of the near-surface (3-4 meter depth) permafrost will thaw by 2100. If greenhouse gas emissions continue to increase strongly, there is a potential that around 70% near- surface permafrost could be lost.

Arctic and boreal permafrost hold large amounts of organic carbon, almost twice the carbon in the atmosphere, and have the potential to significantly increase the concentration of greenhouse gases in the atmosphere if they thaw. It is unclear whether there is already a net release of carbon dioxide or methane due to the ongoing thaw of the Arctic permafrost. In the future, increased plant growth can increase the storage of carbon in soils and offset carbon release from permafrost thaw, but not at the scale of large changes on the long term.

Wildfires are disturbing ecosystems in most tundra and boreal as well as mountain regions.

Key Message: We must act now before it is too late

The report finds that strongly reducing greenhouse gas emissions, protecting and restoring ecosystems, and carefully managing the use of natural resources would make it possible to preserve the ocean and cryosphere as a source of opportunities that support adaptation to future changes, limit risks to livelihoods and offer multiple additional societal benefits.

“We will only be able to keep global warming to well below 2°C above pre-industrial levels if we effect unprecedented transitions in all aspects of society, including energy, land and ecosystems, urban and infrastructure as well as industry. The ambitious climate policies and emissions reductions required to deliver the Paris Agreement will also protect the ocean and cryosphere – and ultimately sustain all life on Earth,” said Debra Roberts, Co-Chair of IPCC Working Group II.

The following has been quote mined directly from the report – it sums up what has already been observed. I’ve attempted to distill key bits from Section A (See here for an extract of Sections A, B, and C that sums up much) … [Be aware that there is mush more than just this]

Projected Physical Changes – What comes next?

The following has been distilled from Section B. Here they lay out possible paths ahead. What happens next is very much our choice …

What truly makes us different as a species is that we can not only observe what is happening, but we can also look ahead to predict what is coming. Climate change is the greatest threat our species has ever faced, so will we take meaningful decisive action?

Reports like this give us the insights, but are we prepared to act?

Hoesung Lee, Chair of the IPCC …

“The open sea, the Arctic, the Antarctic and the high mountains may seem far away to many people, But we depend on them and are influenced by them directly and indirectly in many ways – for weather and climate, for food and water, for energy, trade, transport, recreation and tourism, for health and wellbeing, for culture and identity.”

“If we reduce emissions sharply, consequences for people and their livelihoods will still be challenging, but potentially more manageable for those who are most vulnerable, We increase our ability to build resilience and there will be more benefits for sustainable development.”

Ko Barrett, Vice-Chair of the IPCC …

“The world’s ocean and cryosphere have been ‘taking the heat’ from climate change for decades, and consequences for nature and humanity are sweeping and severe, The rapid changes to the ocean and the frozen parts of our planet are forcing people from coastal cities to remote Arctic communities to fundamentally alter their ways of life,”

“By understanding the causes of these changes and the resulting impacts, and by evaluating options that are available, we can strengthen our ability to adapt, The Special Report on the Ocean and Cryosphere in a Changing Climate provides the knowledge that facilitates these kinds of decisions.”

I’ve only scratched the surface here, there is considerably more detail.

What we have here within this report is the very best available scientific knowledge. This is as good as it gets.

Tempting as it is to have the last word, I feel that really belongs to Debra Roberts, Co-Chair of IPCC Working Group II …

“The more decisively and the earlier we act, the more able we will be to address unavoidable changes, manage risks, improve our lives and achieve sustainability for ecosystems and people around the world – today and in the future,”