Science does not stand still, the true beauty of it is that each and every day our understanding increases. Here now are a couple of news items that caught my eye today … new knowledge … basically stuff that was previously unknown.

Observers in relative motion or at different gravitational potentials measure disparate clock rates. These predictions of relativity have previously been observed with atomic clocks at high velocities and with large changes in elevation. We observed time dilation from relative speeds of less than 10 meters per second by comparing two optical atomic clocks connected by a 75-meter length of optical fiber. We can now also detect time dilation due to a change in height near Earth’s surface of less than 1 meter. This technique may be extended to the field of geodesy, with applications in geophysics and hydrology as well as in space-based tests of fundamental physics. 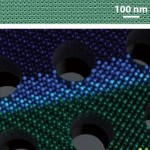 Computers, light bulbs, and even people generate heat — energy that ends up being wasted. With a thermoelectric device, which converts heat to electricity and vice versa, you can harness that otherwise wasted energy. Thermoelectric devices are touted for use in new and efficient refrigerators, and other cooling or heating machines. But present-day designs are not efficient enough for widespread commercial use or are made from rare materials that are expensive and harmful to the environment.

Researchers at the California Institute of Technology (Caltech) have developed a new type of material — made out of silicon, the second most abundant element in Earth’s crust — that could lead to more efficient thermoelectric devices. The material — a type of nanomesh — is composed of a thin film with a grid-like arrangement of tiny holes. This unique design makes it difficult for heat to travel through the material, lowering its thermal conductivity to near silicon’s theoretical limit. At the same time, the design allows electricity to flow as well as it does in unmodified silicon.

“In terms of controlling thermal conductivity, these are pretty sophisticated devices,” says James Heath, the Elizabeth W. Gilloon Professor and professor of chemistry at Caltech, who led the work. A paper about the research will be published in the October issue of the journal Nature Nanotechnology. 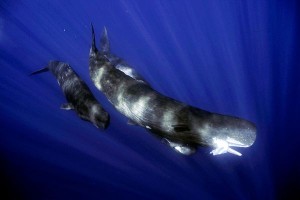 Carrying the remains of a roughly 30-foot (9-meter) giant squid in her jaws, a female sperm whale, with a calf at her side, swims near the surface off Japan‘s Bonin Islands (map) in the northwestern Pacific. Taken on October 15, this and other “absolutely sensational” new pictures offer rare proof of the sperm whale’s taste for giant squid, said giant squid expert Steve O’Shea of the Auckland University of Technology in New Zealand.

The pictures may also reveal that adult sperm whales, which grow up to 59 feet (18 meters) long, use pieces of their prizes to teach youngsters how to catch their own, O’Shea told National Geographic News.

The group of five adults and one calf kept diving deep in unison, photographer Tony Wu told the Daily Mail. “It seemed as if the adult whales were trying to teach the baby to dive and also to eat squid,” he said.

Forget wind power or conventional solar power, the world’s energy needs could be met 100 billion times over using a satellite to harness the solar wind and beam the energy to Earth – though focussing the beam could be tricky.

The concept for the so-called Dyson-Harrop satellite begins with a long metal wire loop pointed at the sun. This wire is charged to generate a cylindrical magnetic field that snags the electrons that make up half the solar wind. These electrons get funnelled into a metal spherical receiver to produce a current, which generates the wire’s magnetic field – making the system self-sustaining.

Any current not needed for the magnetic field powers an infrared laser trained on satellite dishes back on Earth, designed to collect the energy. Air is transparent to infrared so Earth’s atmosphere won’t suck up energy from the beam before it reaches the ground.

Back on the satellite, the current has been drained of its electrical energy by the laser – the electrons fall onto a ring-shaped sail, where incoming sunlight can re-energise them enough to keep the satellite in orbit around the sun.

A relatively small Dyson-Harrop satellite using a 1-centimetre-wide copper wire 300 metres long, a receiver 2 metres wide and a sail 10 metres in diameter, sitting at roughly the same distance from the sun as the Earth, could generate 1.7 megawatts of power – enough for about 1000 family homes in the US.

‘Coreshine’ Sheds Light on the Birth of Stars: Astronomers Discover a New Phenomenon in Molecular Clouds

Science is literally in the dark when it comes to the birth of stars, which occurs deep inside clouds of gas and dust. These clouds are completely opaque to ordinary light. Now, a group of astronomers has discovered a new astronomical phenomenon that appears to be common in such clouds, and promises a new window onto the earliest phases of star formation. The phenomenon — infra red light that is scattered by unexpectedly large grains of dust, which the astronomers have termed “coreshine” — probes the dense cores where stars are born.

The research is published in the Sept. 24, 2010 issue of the journal Science.

Stars are formed as the dense core regions of cosmic clouds of gas and dust (“molecular clouds”) collapse under their own gravity. As a result, matter in these regions becomes ever denser and hotter until finally nuclear fusion is ignited: a star is born. This is how our own star, the Sun, came into being; the fusion processes are responsible for the Sun’s light, on which life on Earth depends. The dust grains contained in the collapsing clouds are the raw material out of which an interesting by-product of star formation is made: solar systems and Earth-like planets.

What happens during the earliest phases of this collapse is largely unknown. Enter an international team of astronomers led by Laurent Pagani (LERMA, Observatoire de Paris) and Jürgen Steinacker (Max Planck Institute for Astronomy, Heidelberg, Germany), who have discovered a new phenomenon which promises information about the crucial earliest phase of the formation of stars and planets: “coreshine,” the scattering of mid-infrared light (which is ubiquitous in our galaxy) by dust grains inside such dense clouds. The scattered light carries information about the size and density of the dust particles, about the age of the core region, the spatial distribution of the gas, the prehistory of the material that will end up in planets, and about chemical processes in the interior of the cloud.

Researchers in Germany have gained new insight into how the immune system causes damage associated with multiple sclerosis (MS), an incurable neuroinflammatory disorder. Using imaging tools which enable investigation of processes in living organisms, they were able to show a direct interaction between immune cells and neurons which plays a significant role in neuronal injury. However, this direct interaction may respond to therapeutic intervention.

Multiple sclerosis is an autoimmune disease in which a person’s own immune system attacks the central nervous system. Symptoms of the disease are variable depending on which nerves are affected, but often include muscle weakness, walking difficulties, numbness and visual disturbances. Research has shown that MS is caused by damage to the protective myelin sheath, an insulating substance that surrounds nerve processes and is critical for transmission of nerve impulses. 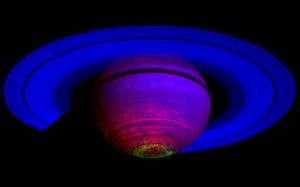 Majestic, ringed Saturn little resembles the relatively tiny blue marble that is Earth, but the massive gas giant planet is home to at least one phenomenon that would be familiar to high-latitude dwellers here on Earth. Although the underlying mechanisms may differ somewhat, Saturn has northern and southern lights at its poles, just as Earth does.

Auroras arise when charged particles are funneled along converging magnetic field lines and into the upper atmosphere at the poles. At Earth, the effect is dominated by the solar wind; at Saturn a complex mixture of other geomagnetic phenomena appear to contribute as well. Charged particles striking Saturn’s upper atmosphere ionize hydrogen atoms and produce infrared radiation, whereas related processes also give off Saturnian auroras at ultraviolet and radio wavelengths.

The infrared auroras show up in green in this false-color composite from NASA’s Cassini spacecraft, stitched together from 65 individual observations taken by the probe’s Visual and Infrared Mapping Spectrometer in 2008. According to a NASA news release, the auroral light appears in the near infrared at wavelengths of three to four microns. Blue designates reflected sunlight at two microns, and red represents thermal emissions at five microns. 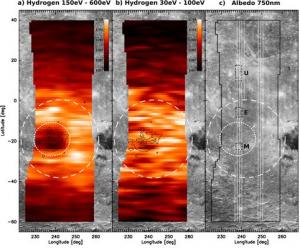 Scientists have discovered a new type of solar wind interaction with airless bodies in our solar system. Magnetized regions called magnetic anomalies, mostly on the far side of the Moon, were found to strongly deflect the solar wind, shielding the Moon’s surface. This will help scientists understand the solar wind behaviour near the lunar surface and how water may be generated in its upper layer.

Observational evidence for these findings is being presented by Drs. Yoshifumi Futaana and Martin Wieser at the European Planetary Science Congress in Rome.

Atmosphere-less bodies interact with the solar wind quite differently than the Earth: Their surfaces are exposed without any shielding by a dense atmosphere or magnetosphere. This causes them to be heavily weathered by meteoroids or the solar wind, forming a very rough and chaotic surface called regolith. So far, the solar wind was thought to be completely absorbed by regolith. However, recent explorations of the Earth’s moon by the Chang’E-1, Kaguya and Chandrayaan-1 spacecrafts have revealed that this interaction is not that simple.

A significant flux of high energy particles were found to originate from the lunar surface, most probably due to the solar wind directly reflected off the Moon’s regolith. “These results may change dramatically the way we understood the solar wind-regolith interaction so far. Since the solar wind is one potential source of water on the Moon, we need to make better models of the lunar hydrogen circulation in order to understand how water molecules form in its upper layers,” says Dr. Futaana of the Swedish Institute of Space Physics. “Also, it will be possible to remotely investigate the solar wind-surface interaction on other airless bodies, such as the Martian moon Phobos or Mercury, by imaging the energetic hydrogen atoms that are reflected back to space when solar wind hits their surface,” he adds.

‘Coreshine’ Sheds Light on the Birth of Stars: Astronomers Discover a New Phenomenon in Molecular Clouds

1 thought on “Science in the News this week”