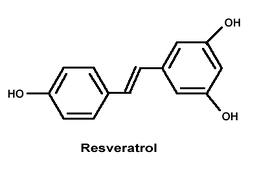 There is a claim over at Keyzweil.net and also at Big Think and various other sources that claim that Resveratrol can help prevent cancer. They write …

University of Leicester scientists have presented groundbreaking new evidence about how a chemical found in red wine can help prevent cancer.

Experts from around the world attended Resveratrol 2012, a major conference at the University to assess the latest advances in the study of resveratrol — a compound found in the skins of red grapes.

The conference featured new findings based on the last two years of research, which show how the chemical can help prevent cancer, heart disease and diabetes.

Is this really true? Well their actual press release is here and claims …

International conference at the University of Leicester will show how resveratrol can prevent cancer, heart disease and diabetes

Now my bullshit meter is starting to clang … a wonder drug that will prevent cancer and heart disease and diabetes … would that be all forms of all of those.

“hey what’s your problem here?” you might ask, well how about the observation that there is a distinct lack of any actual evidence, or papers for these claims being presented. That need not imply that this is all hype, perhaps the papers are deemed too technical for a press release.

OK, lets step back and see what the current state of play actually is using the scientific data for each of these claims.

There are studies that do indeed show longer life in yeast, worms and even some benefits in elderly mice. Be warned, just because it works in mice does not imply it would work in us, there is no published evidence anywhere in the scientific literature of any clinical trial for efficacy in humans.

The strongest evidence of anticancer action of resveratrol exists for tumors it can contact directly, such as skin and gastrointestinal tract tumors. For other cancers, the evidence is uncertain, even if massive doses of resveratrol are used.

Three studies have investigated the effect of resveratrol on the risk of cancer in normal mice living out a normal lifespan; all of them have found resveratrol supplementation has no significant effect on the burden of tumors, nor on the rate of cancer death.

There is a bit of a problem here, the studies into the cardioprotective effects of resveratrol is based on the research of Dipak K. Das, however, he has been found guilty of scientific fraud and many of his publications related to resveratrol have been retracted.

End-game for this claim? Perhaps not, a 2011 study concludes, “Our data demonstrate that both melatonin and resveratrol, as found in red wine, protect the heart in an experimental model of myocardial infarction via the SAFE pathway.”

Now don’t rush out yet … most of the research on resveratrol’s antioxidant and anti-platelet properties has been done using test-tube or tissue-culture preparations.

This appears to be a credible claim, in human clinical trials, resveratrol has lowered blood sugar levels in both Phase Ib and Phase IIa research, conducted by Sirtris Pharmaceuticals, Inc.

So should I be worried, can I not simply dive in and give it a go, what harm could it do?

There are a couple of reasons to pause and be cautions here, apart from simply enriching the supplement makers on the basis of pure hype …

Epidemiologic studies can find associations between the consumption of foods or dietary supplements and various health outcomes. Animal experiments can demonstrate what can happen in the species tested. However, only human clinical trials can determine whether supplementation is useful for humans. Resveratrol has not been tested in clinical trials, and most clinical trials of other antioxidants have failed to demonstrate the benefits suggested by preliminary studies. Some substances—most notably beta-carotene—have even produced adverse effects. My advice is to ignore the hype surrounding resveratrol and eat a balanced diet that contains adequate amounts of fruits and vegetables.