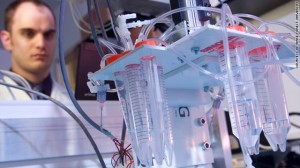 (CNN) — Researchers are developing a specialized skin “printing” system that could be used in the future to treat soldiers wounded on the battlefield.

Scientists at the Wake Forest Institute for Regenerative Medicine were inspired by standard inkjet printers found in many home offices.

“We started out by taking a typical desktop inkjet cartridge. Instead of ink we use cells, which are placed in the cartridge,” said Dr. Anthony Atala, director of the institute.

The device could be used to rebuild damaged or burned skin.

The project is in pre-clinical phases and may take another five years of development before it is ready to be used on human burn victims, he said.

Other universities, including Cornell University and the Medical University of South Carolina, Charleston, are working on similar projects and will speak on the topic on Sunday at the American Association for the Advancement of Science conference in Washington. These university researchers say organs — not just skin — could be printed using similar techniques.

Burn injuries account for 5% to 20% of combat-related injuries, according to the Armed Forces Institute of Regenerative Medicine. The skin printing project is one of several projects at Wake Forest largely funded by that institute, which is a branch of the U.S. Department of Defense.

Wake Forest will receive approximately $50 million from the Defense Department over the next five years to fund projects, including the skin-creating system.

Researchers developed the skin “bio-printer” by modifying a standard store-bought printer. One modification is the addition of a three-dimensional “elevator” that builds on damaged tissue with fresh layers of healthy skin.

The BBC also has the store here that includes a demo video.

You can also read a paper written up a research team here who are working on printing ears.