The most distant galaxy ever detected has been found .. how old? 13.2 billion light years … <insert stunned silence here> …Yikes!! … that’s close to the start of the universe … now that is truly fascinating. 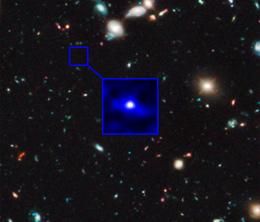 And here it is … Spotted in the Hubble Ultra Deep Field infrared image.

The finding “pushes the data to the very limits”, says Rychard Bouwens, an astronomer now at Leiden University in the Netherlands and a co-author of the study, which is published today in Nature

Bouwens and his colleagues determined the distance to this galaxy using ‘redshift’ measurements. As the Universe expands and objects in it move apart, observers perceive light travelling from far-flung sources as stretched to longer wavelengths — that is, towards the red end of the electromagnetic spectrum. The further away something is, the faster it recedes, and the more the light is stretched.

Bouwens’s team looked for objects whose light has been redshifted out of the optical portion of the spectrum and into the infrared. The primordial galaxy that they found is so remote that its light is detectable only at the longest infrared wavelengths that Hubble can see.

Because of its distance, we see this galaxy as it existed at an early era of the Universe — about 480 million years after the Big Bang. This period is at the edge of Hubble’s observational limits, but models suggest that the telescope should have detected several galaxies from the same time period instead of one, says Bouwens.

The near-barrenness of this epoch stands in contrast to a period roughly 650 million years after the Big Bang, in which the team has found around 60 galaxies.

You can read more here at nature … you may want to, there is lots more info there regarding the implications of this.

Also, here is a link to the actual paper published in nature today entitled, “A candidate redshift z ≈ 10 galaxy and rapid changes in that population at an age of 500 Myr“. [That will get you as far as the abstract … sadly, to get the actual paper, you need buy it for $32 or have a Nature subscription]