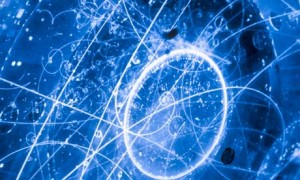 I’m sure you are by now all familiar with the news, but just in case not, lets start with quick summary. An Italian experiment has unveiled evidence that fundamental particles known as neutrinos can travel faster than light.

This comes from an experiment that is called OPERA (Oscillation Project with Emulsion-tRacking Apparatus), and lies 1,400 metres underground in the Gran Sasso National Laboratory in Italy. It is designed to study a beam of neutrinos coming from CERN, Europe’s premier high-energy physics laboratory located 730 kilometres away near Geneva, Switzerland. The new result is simple — the neutrinos are arriving 60 nanoseconds faster than the speed of light allows. The researchers have measured the 730-kilometre trip between CERN and its detector to within 20 centimetres. They can measure the time of the trip to within 10 nanoseconds, and they have seen the effect in more than 16,000 events measured over the past two years.

Important Note: BE SKEPTICAL, this is not at all conclusive and it is quite possible that they have made a huge mistake. Subir Sarkar, head of particle theory at Oxford University, explains:

“If this is proved to be true it would be a massive, massive event. It is something nobody was expecting. The constancy of the speed of light essentially underpins our understanding of space and time and causality, which is the fact that cause comes before effect. Cause cannot come after effect and that is absolutely fundamental to our construction of the physical universe. If we do not have causality, we are buggered.“ 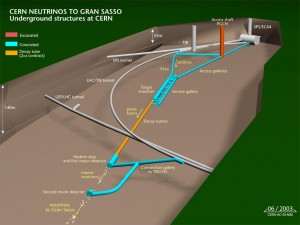 What has now happened is that after checking and rechecking they have gone public by writing up all the details in a paper. That paper is here. Their approach is fundamentally right, extreme caution is being exercised because it potentially undermines a concept that forms a cornerstone of our understanding of the universe and the concept of time – nothing can travel faster than the speed of light, or to be more specific this appears to breach the space-time constant C, (the limit at which information can travel) and so apparently this breaks causality.

What happens now is that the physics community needs to scrutinise the paper and help uncover any flaws in the measurement, or verify it with their own experiments.

Is it really true? Perhaps not …

If it is proven, (… and that is a huge if …), then where do we go next with our understanding?

What we do need to do is to appreciate that caution is very appropriate, not simply because it overturns our understanding of physics, but also because neutrino experimental results are not historically all that reliable. What happens now is that teams at two experiments known as T2K in Japan and MINOS (Main Injector Neutrino Oscillation Search) near Chicago in the US will now attempt to replicate the finding. Yes OK, so the MINOS experiment saw hints of neutrinos moving at faster than the speed of light in 2007 but they faced issues then because there was too much uncertainty in the detector’s exact position to be sure, so they had already been planning more accurate follow-up experiments before the latest OPERA result.

DO NOT HOLD YOUR BREATH – It will take then a year or two.

If it really is true then should we abandon relativity? Perhaps not, I find it quite credible that light is failing to reach the maximum possible speed C because somehow is interacting with the vacuum or with matter. Neutrinos are less interactive and may approach C more closely than the photons. You also need to consider that the special theory of relativity has been the most tested theory in all of physics and has never failed (until now!!).

You also need to remember that we have been here before. A couple of decades ago we had the claim that quantum tunneling could send information faster than light, but that did not stand up to scrutiny.

So for now, don’t jump to any conclusions either way. Instead be appropriatly skeptical and let the subject matter experts focus on the problem and reach a conclusion that can be trusted.

Final word from xkcd (click picture for a larger view)