There is a story on the BBC today that pushed my, “Oh thats cool” button. Jason Palmer, the BBC Science reporter, writes … 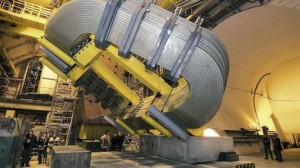 Large Hadron Collider researchers have shown off what may be the facility’s first “new physics” outside our current understanding of the Universe.

The result may help explain why we see so much more matter than antimatter.

The team stresses that further analysis will be needed to shore up the result.

At the moment, they are claiming a statistical certainty of “3.5 sigma” – suggesting that there is less than a 0.05% chance that the result they see is down to chance.

The team has nearly double the amount of data that they have analysed so far, so time will tell whether the result reaches the “five-sigma” level that qualifies it for a formal discovery.

If curious to read more, then click here to read the full story …