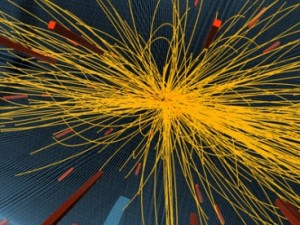 So how are the folks over at the LHC getting on? Quite well apparently …

Since December, the Large Hadron Collider (LHC) has been smashing particles together at record-setting energy levels. Physicists hope that those high-energy collisions could replicate the conditions seen immediately after the Big Bang, shedding light on how our universe came to be. Now, data from collisions that took place in July suggests that the LHC may have have taken a step toward that goal.

The finding, which has been submitted to the Journal of High Energy Physics, comes from proton-proton collisions that occurred in the LHC in July, each of which produced 100 or more charged particles. One of the two large, general-purpose detectors at LHC, the Compact Muon Solenoid (CMS) experiment, measured the path that each of these particles took after the collision.

The CMS physicists observed a surprising new phenomenon in some pairs of those particles: They appeared to be associated together at the point of collision. That is, when some pairs of particles fly away from each other after the collision, their respective directions appear to be correlated. Such correlations between particles that move away from each other at near the speed of light had not been seen before in collisions of protons.

So what happens next?

In the upcoming months, physicists plan to increase the intensity of LHC proton beams, providing at least 100 times more data that can be used to further study this phenomenon. They also plan to run beams of heavier ions, such as lead. Based on these studies, it will be possible to eliminate many of the proposed explanations and  to study if the effects in proton-proton and heavy ion collisions are related.