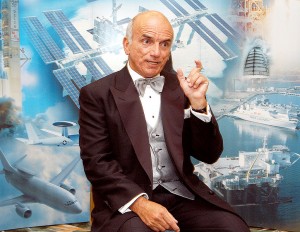 The Inspiration Mars Foundation,  an organization led by Dennis Tito, the first space tourist (pictured), will apparently announce next Wednesday Feb. 27 a planned mission to Mars in 2018.

So is he going to be going himself?

Nope, I suspect not, while he did personally buy a ticket for a visiting mission to the International Space Station, and was there for eight days. My case rests on the observation that in 2018 he will be 78 … unless of course he is thinking of making a one-way trip.

The thinking behind this mission is to  take advantage of a unique window of opportunity; the orbits of Earth and Mars will be closely aligned, so the round-trip journey would start in January 2018 and take only 501 days … (yes, I guess I did write “only”).

Is this a viable proposal?

Since no details are available yet on how they will get there or even if a Mars landing is planned, we just can’t say … but since 2018 is just five years away, the probability of this actually happening is a tad low.

So what is happening on Wednesday?

The speakers they lined up for the press conference give some clues. They will have Jonathan Clark of the National Space Biomedical Research Institute in Houston, Texas, a former NASA crew surgeon and recent advisor on Felix Baumgartner’s supersonic skydive from near the edge of space. He will probably speak about the health risks of a long-term space mission, which hints at the possibility of a crewed mission.

Also speaking are Jane Poynter and Taber MacCallum of Paragon Space Development, a company with expertise in life support in extreme environments. The pair were both members of the Biosphere 2 mission, a controversial attempt at simulating a space colony two decades ago, and have previously proposed landing a greenhouse on the moon to grow flowers there.

Here is the actual press release …

The Inspiration Mars Foundation, a newly formed nonprofit organization led by American space traveler and entrepreneur Dennis Tito, invites you to attend a press conference detailing its plans to take advantage of a unique window of opportunity to launch an historic journey to Mars and back in 501 days, starting in January 2018. This “Mission for America” will generate new knowledge, experience and momentum for the next great era of space exploration. It is intended to encourage all Americans to believe again, in doing the hard things that make our nation great, while inspiring youth through Science, Technology, Engineering and Mathematics (STEM) education and motivation.

Getting to MARS, down to the surface and then back will take a considerable degree of resolve and $$$, so are Mr Tito’s pickets truly that deep? I suspect not.