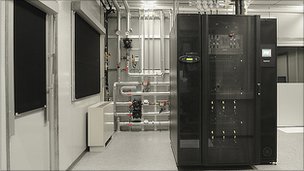 Today almost 2% of the worlds energy consumption is dedicated to the construction and running of computer hardware. To get us to this position, the speed of technical development has been quite astonishing. Go back 50 years and one transistor would cost approx 1 dollar, today the cost of 1 transistor is about 100th of the cost of printing a single letter on a page, so with such a huge leap the challenge we now face is energy-efficiency.

A team at IBM’s Zurich lab is currently attempting to address this by reducing the energy consumption, and they have already built a prototype called Aquasar to demonstrate a water-cooling principle that may help. The result so far is that it is almost 50% more energy-efficient than the world’s leading supercomputers.

Why water? Well basically because the overwhelming cause of those energy costs is in cooling because computing power generates heat as a side product. The BBC reports …

“We currently have built this Aquasar system that’s one rack full of processors. We plan that 10 to 15 years from now, we can collapse such a system in to one sugar cube – we’re going to have a supercomputer in a sugar cube.”

Its still early days and is not in any way a done deal, there are still engineering problems that need to be cracked. Utilizing water to rapidly get heat out from just the right parts still demands quite a lot of effort. Still, its a very promising direction to go in. As a solution, air cooling has been around for quite some time, look inside your own desktop and there you will find a fan, but utilizing water is far more efficient since it can hold about 4000 times more waste heat. Promising as all this is, it does introduce more complexity, ensuring that you engineer connections that are not only efficient but also waterproof is quite demanding (remember, water and electricity and not exactly best friends).

Liquid cooling is not new, the Cray-2 made by Cray Research starting in 1985 submerged the computer’s components in a thermally conductive liquid, so using common water is quite a brave step to take and is beyond those special liquids. So where exactly are they going with this …

water cooling based on a slimmed-down, more efficient circulation of water that borrows ideas from the human body’s branched circulatory system. However, the engineers are exploring the third dimension first. They want to stack processors one on top of another, envisioning vast stacks, each separated by water cooling channels not much more than a hair’s breadth in thickness.

Because distance between processors both slows down and heats up the computing process, moving chips closer together in this way tackles issues of speed, size, and running costs, all at once. In an effort to prove the principle the team has built stacks four processors high. But Dr Michel concedes that much work is still to be done.

So there you have it … just add a bit of water and we can go 3D by stacking it all up … well OK, it still has some way to go, but its an interesting direction.

You can find the BBC article by clicking here.