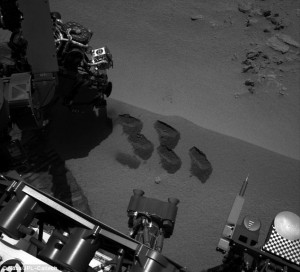 The quote of the moment is … ‘This data is gonna be one for the history books. It’s looking really good,’ said John Grotzinger, chief scientist in the Curiosity team, in an interview with NPR.

Mr Grotzinger would not be drawn on what the discovery actually was. He told NPR that his team won’t be ready to talk about the discovery for several weeks.

…mission scientists are keeping quiet for the time being. (Sigh! … makes frustrated noise). Then again, its best to check and be sure, a big announcement followed by, “Oh wait … never mind” would not be cool.

So when do we get to find out?

Findings will be revealed at the Autumn meeting of the American Geophysical Union, planned to begin on December 3 in San Francisco, California.

The finding, whatever it is, was made by the six-wheeled rover’s Sample Analysis at Mars (SAM) instrument in the Rocknest area of the Gale Crate, close to where the rover touched down. If we can understand what that is, then we get a bit of a handle on what this might be. It is of course Curiosity’s on-board chemistry lab and is able to take a sample of Martian rock, soil or air and find out what it is made of. Most importantly, it is capable of identifying organic compounds – carbon containing substances that could indicate life. OK, this leads to an obvious question 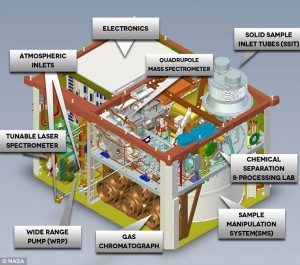 Earth shattering from this specific instrument sure hints at signs of life to me, but then perhaps that is just wishful thinking on my part. Then again, the degree of caution here does tempt me to lean in that direction.

Think about it … “Water on Mars” = “Oh … Interesting”, but “Signs of life” = “Earth shattering, one for the history books”. Well, early dec is not too long to wait.

The news is spreading …

Lots of speculation, no additional facts, but Mike Hanlon in the Mail does make a good point …

Four years ago similar rumours of an earth shattering discovery on Mars surrounded findings by the Phoenix Mars Lander. Everyone thought this meant ‘life’ but in fact the story, although interesting, was rather more academic than that, involving those mysterious perchlorate chemicals.

Indeed yes, terms such as “earth-shattering” and “one for the history books” are relative terms. Dr John Grotzinger, who started all this speculation, has poured his life into the project and so what might simply be a minor milestone for us, could perhaps be perceived as “earth-shattering” from his. To add to this note of caution, it may also be worth observing that Grotzinger is a Geologist, not a Biologist. Perhaps what we do have here are clues to the origin of life on Earth.

Additionally, NASA has now trotted out a spokesman to calm things down a bit.

“John was delighted about the quality and range of information coming in from SAM during the day a reporter happened to be sitting in John’s office last week. He has been similarly delighted by results at other points during the mission so far,” spokesman Guy Webster told AFP.

“The scientists want to gain confidence in the findings before taking them outside of the science team. As for history books, the whole mission is for the history books,” Webster said.