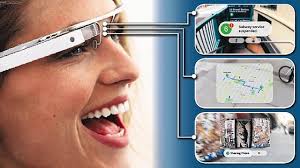 As I’m sure you are aware, Google has some cool glasses in the pipeline and are about to release them into the wild, and of course the media has responded with the usual puns such as …

Google Glass? You have to applaud their vision

… but will it be of practical value and a game changer? I honestly don’t know, but I suspect so. An “augmented reality head-mounted display” sounds cool, but a lot of questions immediately spring to mind, will it work if you wear contacts (I suspect so), but what if you already wear glasses, how will it then work, prescription variation perhaps or as a plug in to regular glasses? Also, imagine the distraction to be had wearing these while driving, perhaps akin to texting on steroids while driving (yikes, am I really reverting to old-fart mode).

Actually, I do get it, and if it delivers on the hype, then I can see the value, because often very simple ideas will deliver huge value. For example, I love the idea of a head-torch … when fiddling about in a dark loft, holding something with one hand and trying to screw it down with the other, what the heck do you hold your torch with? Cue drum-roll for a head torch, a very simple idea that makes that a lot easier. In a similar manner, when out and about, being able to take photos, video, simply reference stuff, or get directions, via google glass does indeed strike me as darn useful.

OK, so at the moment Google want people to try it, but not just anybody, you need to be a US resident , pay them $1500 for the privilege of testing their stuff, and the deadline for applications is February 27th, and … wait a moment, roll that back a bit …they want you to pay them (plus tax) to test their stuff!

I’ve seen this business model before.

Many years ago on a visit to Northern Ireland, I went with the family to what was called an Open farm. That is basically a farm when you get to see what happens, no exotic animals, just the usual cows, pics, sheep, etc… all packaged up into what could be best described as theme-park-mode along with the obvious hay wagon rides, and yes the real product being farmed here was tourists. At one point my father turned to me and pointed out how truly surreal this all was, they had successfully managed to persuade us to pay to come on their farm, so that we could then buy off them their animal food they would have used to feed their animals with anyway so that we could then feed their animals for them … and feel excited and privileged to be doing so.

So yes indeed … Google wants a few  willing volunteers to pay them to do quality control, and to be excited about doing this for them.

Even when I put it like this, yes, I confess, I’d still do it if I could, perhaps I’m just jealous that I can’t because I’m not a US resident. Even if the glasses turn out to be crap I must still admit that their marketing machine is awesome, and I suspect the glasses will be also, and will end up being the next must-have hot item (but lets suspend judgement on that and see what the truly impartial reviews actually say).

OK, yes I know, you want to know what it will be like, so here you go … (digest with a pinch of salt, these are official promo clips)

And here is somebody who has tried it out … (yes, another promo clip)