Of all the Hubble images available, what is your favorite? Well, here are a couple of mine. 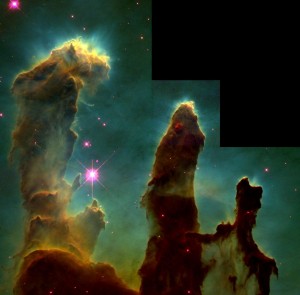 Here you can see columns of interstellar gas and dust in the Eagle Nebula, and was taken April 1, 1995.

To see a larger higher-resolution copy, click on the image.

The columns that you can see here––which resemble stalagmites protruding from the floor of a cavern––are composed of interstellar hydrogen gas and dust, which act as incubators for new stars. Inside and on their surface astronomers have found knots or globules of denser gas, called EGGs (“Evaporating Gaseous Globules”). Stars are being formed inside a portion of these EGGs.The longest of the ‘Pillars’ is seven light years long, and because of their massive density interior gasses contract gravitationally to form stars. At each ‘pillars’ end, the intense radiation of bright young stars causes low density material to boil away, leaving stellar nurseries of dense EGGs exposed.

Oh, and least you wonder, the missing part at the top right is because one of the four cameras has a magnified view of its portion, which allows astronomers to see finer detail.

Why was this important? – Because these, and other images made at this time, greatly improved scientific understanding of processes inside the nebula.

Due to the huge distance between us (approximately 7000 light years), the Pillars of Creation may already be gone, and instead a stellar star nursery could have taken its place. In early 2007, scientists using the Spitzer discovered evidence that potentially indicates that the Pillars were destroyed by a nearby supernova explosion about 6,000 years ago, but the light showing the new shape of the nebula will not reach Earth for another millennium. 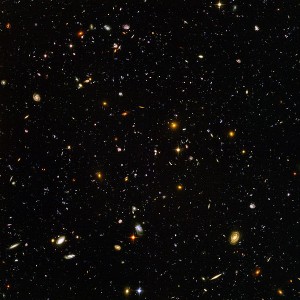 This is an image of a small region of space in the constellation Fornax. The data was collected over a period from September 24, 2003, through to January 16, 2004 and is the deepest image of the universe ever taken. We are looking back approximately 13 billion years (between 400 and 800 million years after the Big Bang).

The HUDF image was taken in a section of the sky with a low density of bright stars in the near-field, allowing much better viewing of dimmer, more distant objects.

The smallest, reddest galaxies, of which there are approximately 10,000, are some of the most distant galaxies to have been taken by an optical telescope, existing at the time shortly after the big bang.

So why is this important? Well, we have now learned that there were High rates of star formation during the very early stages of galaxy formation, under a billion years after the Big Bang. However, what is even more fascinating is that a tiny tiny little dark spot in the sky is … full of thousands upon thousands of Galaxies.

As before, you can click on the image to see a bigger version. However, you can also click here to see an even higher resolution image (and be patient, it takes time to download).