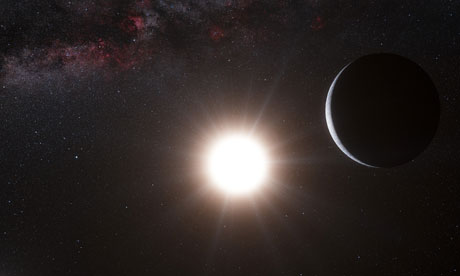 This is amazing news, an earth sized planet has been found in orbit around Alpha Centauri B.

That is close, really really close, to be precise 1.34 parsecs (4.4 light years) away, and so in stellar terms it is next door.

The report in the Guardian says … “similar to Earth in location and size” … er sadly no, not that exciting. Yes similar size, but way too close for life, the planet is much closer to its star than Mercury is to the Sun. Earth is 1AU from the sun, this planet is 0.04 AU’s from its star, and takes only 3.236 days to orbit.

The precise details of all this were published in Nature yesterday. There they explain how they did this …

…the team measured its velocity three times a night, nearly every night, for just over three years, to tease out the subtle motion measured just above the detection limit …

Yikes … measuring three times a night, every night for over three years, now that is indeed dedication and was right up to the limit of what they could potentially detect. Could they use this approach to find an actual earth-sized planet in the goldilocks zone (not too hot and not too cold for life)? Alas, apparently not …

Finding a true Earth twin, circling a Sun-like star at a distance similar to Earth’s orbital radius around the Sun, would require another leap in sensitivity, to motions of just 9 centimetres per second. For now, most astronomers are pinning their hopes of identifying an exo-Earth on a rival planet-finder: the NASA spacecraft Kepler, which watches for a dimming in a star’s light as a planet crosses its face. Kepler was launched in 2009, and data from its first two years of operation have revealed about 3,000 candidate exoplanets, says principal investigator William Borucki, who presented fresh results on 15 October at a meeting of the Division of Planetary Sciences of the American Astronomical Society in Reno, Nevada.

Oh and least you wonder, they did all this using the ground based ESO 3.6-m telescope at La Silla Paranal
Observatory, Chile. To take it to te next level, “another leap in sensitivity, to motions of just 9 centimetres per second”, I suspect they will need to utilize space based instruments.

This latest discovery is, in my mind, really exciting news, our understanding of what is out there is rapidly increasing. We are indeed are a very interestinbg path of discovery here and are getting closer and closer to finding a second earth.