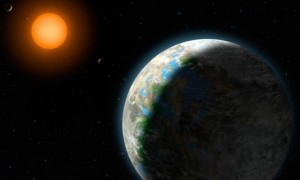 Its all over the Internet, we finally have a home away from home, somewhere else to go … (What follows is a summary, but if interested in all the details then skip to the end and click the link to download the paper written by the Astronomers who have spent 11 years making this discovery). I’ve bypassed the press stories which gave it a bit a bit of spin and some dumming down, and by doing so I was quite astonished that a lot of the press coverage missed something quite profound about all this. First lets start with the following from the abstract in the team’s paper …

We present 11 years of HIRES precision radial velocities (RV) of the nearby M3V star Gliese 581, combining our data set of 122 precision RVs with an existing published 4.3-year set of 119 HARPS precision RVs. The velocity set now indicates 6 companions in Keplerian motion around this star…

… a 6th planet, GJ 581g, a minimum-mass 3.1 M⊕ planet orbiting at 0.146 AU with a period of 36.6 days. The estimated equilibrium temperature of GJ 581g is 228 K, placing it squarely in the middle of the habitable zone of the star and offering a very compelling case for a potentially habitable planet around a very nearby star.

OK, its “potentially” habitable and not earth-like, thats all we know, but that in itself is quite exciting. However, the true story here is that the implications of this discovery are quite frankly profound … its not just the fact of this specific discovery itself, but also  … as described in their own words within their paper …

So thats the key here, its not just this discovery by itself, but the fact that it hints at a vast number of habitable planets out there.

OK, so a bit more about this discovery. It appears to be potentially a home away from home … as reported in the press …


The star Gliese 581 is now known to have six and perhaps seven planets orbiting it. And unlike most distant solar systems detected so far, the planets all orbit in a circular path and are lined up by type in a way similar to our solar system.

“As we collect more data, we can see the system looks like our own – with an inner clutch of rocky, terrestrial planets and then a big loner like Jupiter further out,” Vogt said.

And precisly how did they find it?

The work by Butler and Vogt was mostly done at the W.M. Keck Observatory on the dormant Mauna Kea volcano in Hawaii and involves indirect measurements of the “wobble” of a target star that is created by the gravitational pull of an orbiting planet. It took 240 lengthy observations of Gliese 581 by the Americans and a Swiss team before Butler and Vogt were able to tease out the measurements of a habitable zone planet.

So what else do we now know about this potentially habitable planet?

Those areas are large enough, Butler said, for heat-loving creatures to live on the sun-facing region of the band and polar bears on the cold-facing side. He also said that because the planet does not rotate on an axis, the view from these areas would be of perpetual sunrise or sunset.

Red dwarf stars like Gliese 581 are considered among the longest living in the universe, so they can “potentially” (yep, its that P word again) provide a stable stellar environment for eons – an important factor in setting the conditions for life. The Earth’s sun is also relatively long-lived but will cool to the point that Earthly life is impossible long before Gliese 581 loses its force.

At only 20 light years away, its more or less in our Galactic back yard, so if we ever work out a means of crossing the void, perhaps by hollowing out an asteroid and sticking some Ion thrusters on it then launching it as a multi-generational ship, we now have a “potential” destination … and perhaps the first of many more potential destinations. It is of course a heck of a long way to go for a “potentially” habitable world, and would be a real shock for those who had devoted several generations only to discover its not … but then again, it just might be. Nope, too much guessing in my mind at this point in time to commit the next several generation to such a trip … but its early days yet, we are learning more and more.


If you are interested in the details by reading the actual paper written by the astronomers who made this discovery, then you can do so by clicking here … to download the complete PDF.

The team conclude their paper with these thoughts …


the mere fact that a habitable planet has been detected this soon, around such a nearby star, suggests that η⊕ could well be on the order of a few tens of percent, and thus that either we have just been incredibly
lucky in this early detection, or we are truly on the threshold of a second Age of Discovery.

Finally, SSV [Steven S. Vogt] would like to extend a very special thanks to his wife Zarmina Dastagir for her patience, encouragement, and wise counsel. And even though, if confirmed, the habitable planet presented herein will officially be referred to by the name GJ 581g, it shall always be known to SSV as ”Zarmina’s World”.

So Zarmina now goes down in history as the very first human to have an entire “potentially” earth-like planet named after her.

2 thoughts on “Earth Like planet at last, ”Zarmina’s World” – some details not in the press stories”