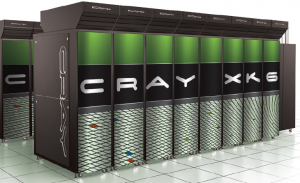 Cray Inc. has signed a $97 million contract [Yikes thats a lot of $$ for an ‘upgrade’] to upgrade the Cray XT5 “Jaguar” supercomputer located at the Department of Energy’s Oak Ridge National Laboratory (ORNL) to a new Cray XK6 supercomputer, nicknamed “Titan.”

The Titan system upgrade, targeted to be completed in 2011, will have a peak performance between 10 and 20 petaflops (quadrillion mathematical calculations per second) of high-performance computing power, Cray said in a statement, making it potentially the world’s fastest supercomputer.

In the second phase, expected to be completed in the second half of 2012, the hybrid Titan system will combine AMD Opteron processors with “Kepler” NVIDIA Tesla graphic processing unit (GPU) technologies, allowing Cray XK6 customers to run applications with either scalar or accelerator components. This will result in one of the first general-purpose GPU supercomputers, with an architecture that will be capable of more than 50 petaflops of performance, according to Cray.

“All areas of science can benefit from this substantial increase in computing power, opening the doors for new discoveries that so far have been out of reach,” said Jeff Nichols, associate laboratory director for Computing and Computational Sciences at Oak Ridge National Laboratory. “Titan will be used for a variety of important research projects, including the development of more commercially viable biofuels, cleaner burning engines, safer nuclear energy, and more efficient solar power.”

So it looks as if GPU-based heterogeneous computing is the road ahead for getting to exascale computing levels within the next decade.

Why do I care? Well because I spent six years working for Cray at the cutting edge, so its nice to see that they are still there leading the way.