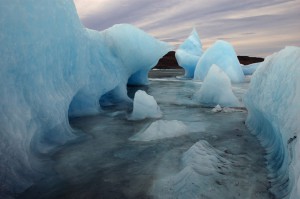 This is cool, I just had to share it. There is a new movie out tomorrow called “Chasing Ice” that is a documentary by environmental photographer James Balog. In 2005 he headed to the Arctic on a tricky assignment for National Geographic: to capture images to help tell the story of the Earth’s changing climate. Even with a scientific upbringing, Balog had been a skeptic about climate change. But that first trip north opened his eyes to the biggest story in human history and sparked a challenge within him that would put his career and his very well-being at risk.

With a band of young adventurers in tow, Balog began deploying revolutionary time-lapse cameras across the brutal Arctic to capture a multi-year record of the world’s changing glaciers, and starting tomorrow you get to watch the results (no I’m not being paid to advertise this, I just think its cool … no pun intended).

There is one stunning sequence where he captures on film the largest iceberg calving ever filmed … no need to wait for tomorrow, you can watch that extract below.

It’s like watching ‘Manhattan breaking apart in front of your eyes’, says one of the researchers for filmmaker James Balog. After weeks of waiting, the filmakers witnessed 7.4 cubic km of ice crashing off the Ilulissat glacier in Greenland. Chasing Ice, released in the UK tomorrow, so if you wonder if you should see Balog’s mission to document Arctic ice being melted by climate change then here is the sequence to help tempt you … enjoy.