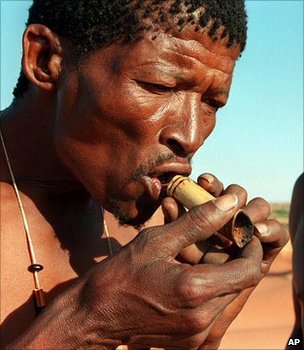 The BBC reports here something we all knew – “Modern humans may have originated from southern Africa”, well OK, Eastern Africa. What is new is that we now have data from a genetic study that points more towards Southern Africa.

Data showed that hunter-gatherer populations in the region had the greatest degree of genetic diversity, which is an indicator of longevity.

It says that the region was probably the best location for the origin of modern humans, challenging the view that we came from eastern Africa.

“Africa is inferred to be the continent of origin for all modern human populations,” the international team of researchers wrote.

“But the details of human prehistory and evolution in Africa remain largely obscure owing to the complex histories of hundreds of distinct populations.”

“One is that there is an enormous amount of diversity in African hunter-gatherer populations, even more diversity than there is in agriculturalist populations,” she told BBC News.

“These hunter/gatherer groups are highly structured and are fairly isolated from one another and probably retain a great deal of different genetic variations – we found this very exciting.”

The study appears in the Proceedings of the National Academy of Sciences, so you can click that link to read the actual study.

“This is a landmark study, with far more extensive data on… hunter gatherer groups than we have ever had before, but I am cautious about localising origins from it”

OK, so thats sensible, its not solid proof of our origin, just a flag that points that way, so don’t treat this as a definitive “humans started here” marker. It is still interesting to discovery that these folks have the greatest degree of genetic diversity than any other human population.