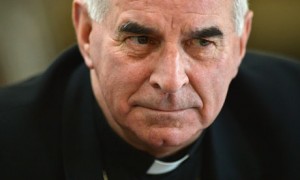 The UK’s Guardian reports something that many have suspected for some time, the UK’s top Catholic cardinal, Britain’s most senior Catholic clergyman, is gay. An assortment of priests have come forward and complained that he has been hitting on them … yes really …

Three priests and a former priest in Scotland have reported the most senior Catholic clergyman in Britain, Cardinal Keith O’Brien, to the Vatican over allegations of inappropriate behaviour stretching back 30 years.

So what does that actually mean? Well lets take a look …

It is understood that the first allegation against the cardinal dates back to 1980. The complainant, who is now married, was then a 20-year-old seminarian at St Andrew’s College, Drygrange, where O’Brien was his “spiritual director”. The Observer understands that the statement claims O’Brien made an inappropriate approach after night prayers.

The seminarian says he was too frightened to report the incident, but says his personality changed afterwards, and his teachers regularly noted that he seemed depressed. He was ordained, but he told the nuncio in his statement that he resigned when O’Brien was promoted to bishop. “I knew then he would always have power over me. It was assumed I left the priesthood to get married. I did not. I left to preserve my integrity.”

In a second statement, “Priest A” describes being happily settled in a parish when he claims he was visited by O’Brien and inappropriate contact between the two took place.

In a third statement, “Priest B” claims that he was starting his ministry in the 1980s when he was invited to spend a week “getting to know” O’Brien at the archbishop’s residence. His statement alleges that he found himself dealing with what he describes as unwanted behaviour by the cardinal after a late-night drinking session.

“Priest C” was a young priest the cardinal was counselling over personal problems. Priest C’s statement claims that O’Brien used night prayers as an excuse for inappropriate contact.

The cardinal maintained contact with Priest C over a period of time, and the statement to the nuncio’s office alleges that he engineered at least one other intimate situation. O’Brien is, says Priest C, very charismatic, and being sought out by the superior who was supposed to be guiding him was both troubling and flattering.

We have seen this before, individuals, who are vigorously and very vocally anti-gay often turn out to be troubled individuals who are actually gay, but for religious reasons, are unable to come to terms with it.

Is this truly the way it is? Apparently yes, homophobia is indeed more pronounced within individuals with an unacknowledged attraction to the same sex. Here are the details of a study that confirmed this …

“Individuals who identify as straight but in psychological tests show a strong attraction to the same sex may be threatened by gays and lesbians because homosexuals remind them of similar tendencies within themselves,” explains Netta Weinstein, a lecturer at the University of Essex and the study’s lead author.

“In many cases these are people who are at war with themselves and they are turning this internal conflict outward,” adds co-author Richard Ryan, professor of psychology at the University of Rochester who helped direct the research.

As for cardinal O’Brian, he has indeed been an outspoken opponent of gay rights, condemning homosexuality as immoral, opposing gay adoption, and most recently arguing that same-sex marriages would be “harmful to the physical, mental and spiritual well-being of those involved“, so much so that last year he was named “bigot of the year” by the gay rights charity Stonewall. It is utterly tragic that he has been unable to come to terms with his own sexuality due to his irrational beliefs, and as a result has caused real harm to so many through his vocal anti-gay campaign.

We now discover via the UK’s Guardian story that this very vocal anti-gay bigot is indeed gay himself. Meanwhile, another Guardian story has an exclusive that confirms that bears do indeed shit in the woods.