Is “Weird” an appropriate term to utilise when faced with some of the quite frankly bizarre things that many of the religiously inspired feel the need to promote? There are of course other words such as “eccentric” or “strange”. The potential criticism is that such terms alienate and divide between humanity and “them” and so some might argue that such language is inappropriate. I’d argue that it is the religiously inspired behaviour itself that has already crafted the “them vs us” scenario and that the deployment of terms such as “weird” simply acknowledges that rather obvious reality.

So how should we respond?

We can’t simply grant it a free pass, but instead should highlight just how odd it all is, not with the goal of inspiring contempt, but to simply laugh at it. This is because humour is a truly effective means of neutralising. 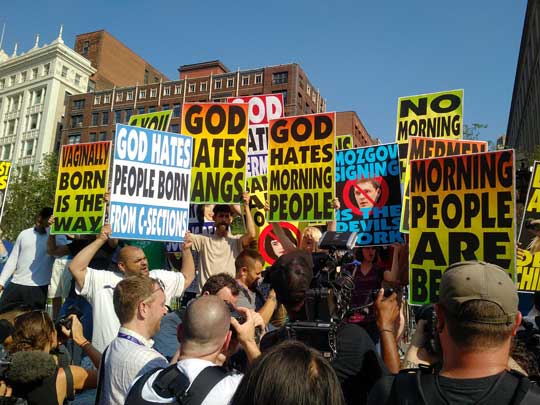 An example of that is illustrated by a response to one of Westboro Baptist Church’s “God Hates Fags” street protests last year. The counter protesters went out and joined them with satire signs that read “God hates Morning People”, or “God hates Bangs”. Everybody loved that response, and so WBC simply became a bit of a joke instead of a target of hatred.

With that thought in mind here is this week’s dose of my top 3 items of religiously inspired weirdness from the past seven days.

Rainbows popped up a few times during the past week. Self appointed Christian evangelist Joshua Feuerstein, they guy in the red hat who loves saying controversial things just to stir up a bit of a reaction, was telling Facebook that he wants a Cross Emoji … 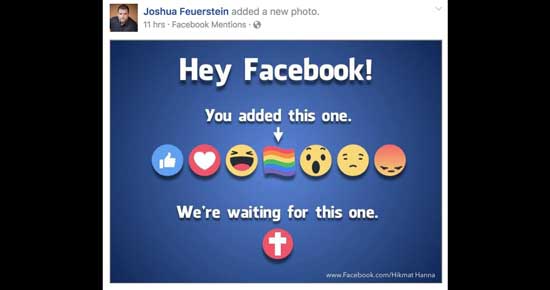 Sure, why not, but only if we can also have the Crescent Moon and star for Islam, then the “Circle-A” symbol for atheism, and the Star of David for Judaism, etc… Oh wait, here is an idea, let’s simply remain religiously neutral and not go ape-shit about any of it.

Meanwhile, Linda Harvey, an anti-gay activist who has a track record of bizarre claims such as teaching that tolerance for LGBTQ people is akin to the “grooming a pedophile does before molesting a child.”, was promoting the idea that Christians should copyright the rainbow because those damn LGBTQ people have “raped” it …

But the sweet rainbow image has been violated, raped by the deluded and fraudulent, and it now serves too often as a garish signpost for slavery to grave homosexual sin.

…Can we trademark the rainbow?

…Their Savior – if they would recognize Him – is the real author of the rainbow for His original life-affirming, godly purposes.

Its current misuse needs to end.

As all the passengers were boarding a flight in Shanghai, an 80 year old Buddhist woman threw a handful of coins into the engine as a “Prayer for Luck” …

Throwing coins for good luck is common in Buddhism, but it is mostly directed at temples, statues, ponds, and wells. This time, one of the coins (worth 1.7 yuan… or 25 cents in the U.S.) hit the engine and caused the flight to be delayed for several hours.

The woman, only identified as Qiu, was taken away for questioning by police.

“After an investigation the involved passenger, surnamed Qiu, said she threw the coins to pray for safety. According to Qiu’s neighbour, Qiu believes in Buddhism.”

Once the initial reaction of WFT by the flight crew was over with they then had to evacuate all 150 passengers off and get some engineers to carefully inspect the engine and clear it for flight (as pictured above). They found nine coins. The potential for complete engine failure is not something that could be ignored and so they did the right thing.

80 year old Qiu will not be permitted to fly … ever. China operates a passenger blacklist and if you cause problems then you are permanently banned.

After much legal wangling that lasted almost two years a monument with the 10 commandments was erected last week outside the Arkansas state capitol. About 24 hours later it was then destroyed by a guy who deliberately drove his car into it. It was not an accident, but instead was quite deliberate.

The guy who did this, Michael Tate Reed, not only video taped himself doing this, but is the same guy who did exactly the same to a similar monument in Oklahoma back in 2014.

Why would he do this?

If you pondered the idea that this is perhaps some deluded atheist activist who has decided to take action, then you would be dead wrong …

“I’m a firm believer that for our salvation we not only have faith in Jesus Christ, but we also obey the commands of God and that we confess Jesus as Lord,” he says in the post. “But one thing I do not support is the violation of our constitutional right to have the freedom that’s guaranteed to us, that guarantees us the separation of church and state, because no one religion should the government represent.”

According to the Tulsa World, a judge ordered Reed to receive mental health treatment after that incident. He was diagnosed with schizoaffective disorder and released under an agreement that required him to continue treatment.

He sent a rambling letter to the newspaper apologizing and describing the voices in his head and his attempts to recover from mental health issues.

… so I suspect it will play out in a similar manner.

Bottom line is just two words – “Religious Nutter”. That’s not a slur, but is an actual medical fact in this instance.