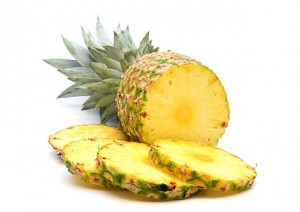 Over here in the UK, it is the time of year when Freshers Fayre’s blossom across numerous university campuses. This is where all the various student societies wheel out a stand and attempt to get the new intake to sign up, and among the bustle of archery clubs and drinking clubs you will also find both the religious and non-religious.

The news is that over at Reading university (not too far from where I am sitting right now), the Reading Atheist, Humanist, and Secularist Society (RAHS), were tossed out because they had a pineapple labelled “Mohammed” on their stall. The Natural Secular Society reports the details here …

Staff from the Reading University Student Union (RUSU), as well as a number of Muslim students objected and asked the society to remove it, with a statement from the society stating that they were told “Either the pineapple goes, or you do”.

In a statement given to the “Student Rights” organisation, (whose strapline is “tackling extremism on campus”) RUSU said that “The Atheist, Humanist & Secularist Society were asked to leave the Freshers’ Fayre after receiving complaints from individual students about a display they had on their stall. They were initially asked to remove the display and after refusal were asked to leave.

“Our Freshers’ Fayre is an inclusive event for all students. As the societies actions were causing upset and distress to a number of individual students and other societies attending we took the decision to ask them to leave”.

The Reading Atheist, Humanist, and Secularist Society (RAHS) have issued the following statement on their Facebook page here ..

Shortly afterwards, the second RUSU staff member returned and ordered RAHS to leave the Freshers’ Fayre. At this point, a group of around five students, some of whom self-identified as Muslim, approached the stall and began to criticise us, asking and telling us to remove the pineapple. Though these students mainly engaged in discussion, one removed the label from the pineapple without our permission.

As the RUSU staff member merely raised his voice and shouted at the RAHS president when he attempted to explain our position, we were ultimately forced to leave the venue. However, several other societies at the Fayre offered to continue distributing our leaflets, and we continued to hand out leaflets outside the venue until we were again asked to leave by RUSU staff members, this time accompanied by RUSU security staff.

The pandering to religious intolerance by the RUSU is utterly insane and also quite frankly appalling. People with religious beliefs will always be offended by others who do not hold the same beliefs, that is reality. Not being offended when others mock your wacky beliefs is not a human right, but freedom of expression is.

Just in case you don’t yet get it yet, here is a selection of three stick figures … 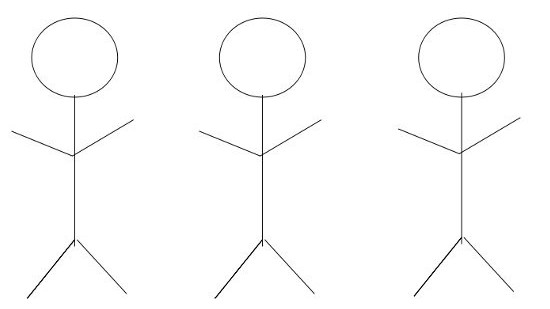 Can you see anything different? Yes that is correct, they are all exactly the same … oh but wait, one of them, and only one, is Mohammed, the other two are not. “Oh, that is highly offensive” chime in some Muslims. OK then, I’m not telling you which one it is, so please do clarify, exactly which of these three do you find offensive?