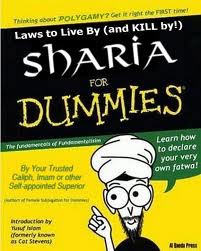 The Muslim Brotherhood’s candidate for the Egyptian presidency, Khairat al-Shater, has declared that introducing sharia law would be his “first and final” objective if he wins elections in May and June.

The moment any state makes such a move, they are in effect making Islam the official state religion and so set the stage for a considerable degree of internal strife in the years to come. Many lives will be destroyed, oppressed and lost … it is utterly tragic.

A fundamental and very basic human right is freedom of thought … in other words, if somebody who is a Muslim decides to convert to some other belief, or perhaps decides they no longer wish to follow a medieval belief system, then the penalty for that is death.

Enabling religious thugs to dictate law can only ever be a national disaster, this has been been demonstrated by every other state that has gone down this road.

The European Court of Human Rights determined that “sharia is incompatible with the fundamental principles of democracy“. They have done so, not because they are biased against a specific belief, but because the moment any state gives such control to a belief system, that state has become a theocratic dictatorship and has done away with the State’s role as the guarantor of individual rights and freedoms. No longer would there be non-discrimination between individuals as regards their enjoyment of public freedoms.

If Egypt does indeed go down this road, it will be paved with the blood of many victims, and might even provoke a military coup.