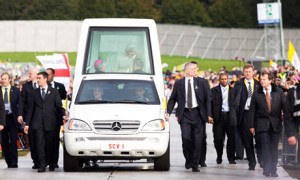 The final bill is in … the UK’s Guardian reports today (here) that the cost of a visit to the UK by the pope cost UK taxpayers £7 Million … or to translator that … the state is sponsoring a propaganda effort by a truly bizarre religious cult that holds some very strange beliefs (we have of course grown up with them and take it all for granted, but have you ever stopped to consider just how truly strange their belief system is – perhaps I’ll blog more about such beliefs another day, but not now).

Anyway, how is this cost justified? Apparently the claim is that the Catholic Church is a state, so it was a visit by a foreign head of state. That’s a claim that can in fact be legally challenged. Christopher Hitchens wrote about this in a Slate article here.

OK, so if they do indeed claim to be a state, then they need to play by those rules, and must be subjected to official scrutiny on its rights practices, which in international law include the treatment of children.

But if they then try to side-step, and claim that the Vatican is not a full state, hence such rules don’t apply, (perhaps because it only enjoys the status of an observer at the United Nations), then why the frack are we treating them as if they were, and paying our tax £££.

Oh, and did I mention the the £7 Million does not include the associated security costs, thats extra.

However, the real gem from the Guardian article is this

The main bill was split between seven Whitehall departments – including the Department for International Development – each paying £1.25m.

This was known, but least you missed it, yes indeed, money earmarked for helping some of the poorest on the planet, the international development fund, has been sucked away to pay one of the richest for his four day jolly to propogate his delusional beliefs.

Ah now that is indeed a thought that fills the heart with joy – not.